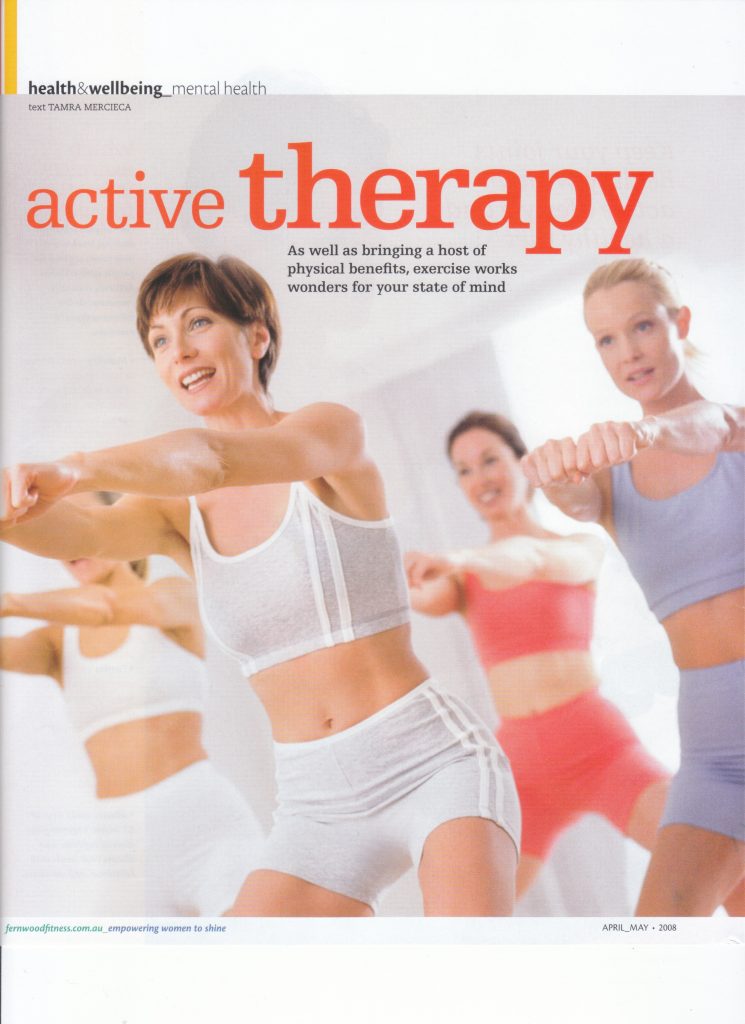 Keeping fit, managing your weight, and warding off disease are all side-effects of exercise. But did you know getting physical can do wonders for your mental health too? Tamra Mercieca explains.

Though it may seem impossible sometimes, exercise is one of the best ways to deal with mental illnesses. Physical activity alters brain chemistry and leads to feelings of wellbeing. Exercise can also be an effective treatment for anxiety, and is a great addition to any stress management program.

Numerous studies show that exercise is a potent mood-booster, and researchers say over the long haul, regular physical activity is a better at controlling depression symptoms, than any psychotherapy or medication. It also distracts the sufferer from focusing on negative thoughts, and is believed to enhance a person’s sense of control over their lives.

33-year-old Sue Koszeghy is a member of Fernwood Altona. She’s suffered from borderline personality and mood disorder since she was 17, and says joining the women’s gym changed her life. “Initially it gave me something to do in the day – something to focus on. It was giving me structure, which is very important with people with borderline personality, because they’re so out of control.”

Sue says when she exercises she feels the benefits immediately. “I don’t find that it lasts days, maybe just a few hours – but it’s immediate. I get satisfaction from the way my body moves and muscles work. The endorphins it creates make me feel really good.”

Endorphins are neurotransmitters produced in the brain that reduce pain and make us feel alive, strong and energized. When the brain produces endorphins (when we exercise) we feel high on life, but when it doesn’t, the normal stresses of life can become increasingly unbearable.

Counsellor Michelle Thompson says exercise has proven to be the best treatment for mental illnesses. “Cardiovascular exercise increases the heart-rate, therefore burning off negative energy which would otherwise be stored in your body and brain which in turn can lead to depression.”

Exercise assists with many of the symptoms associated with high prevalence disorders such as depression by increasing appetite, promoting natural sleep cycles, improving mood, and by building strength and a sense of achievement that supports self-esteem.

Schizophrenia is one of the most disabling of all mental illnesses and exercise is shown to reduce auditory hallucinations, raise self-esteem, sleep patterns and general behaviour in people living with the debilitating condition.

You don’t need to spend seven days a week in the gym to notice a difference in your moods, In fact, you shouldn’t because too much exercise is bad for you. It can lead to injuries and fatigue.

Researchers have found that a brisk 30-minute walk three time a week, can be just as effective in relieving major depression as antidepressant drugs. Even smaller amounts of activity – as little as 10 to 15 minutes at a time – have been shown to improve mood in the short term.

If the idea of exercise puts you right off – just realise that it doesn’t have to be long, hard, demanding and unpleasant to be good for you. You just need to find something that you absolutely love, and get excited about doing each day.

People struggling with eating disorders are getting relief from clowning around, literally, as part of groundbreaking pilot program being run in Melbourne. An unusual course in circus skills is helping people with anorexia and bulimia overcome their compulsive tendencies by juggling, tightrope walking and aerial swinging.

Melbourne’s NorthWestern Mental Health group co-ordinator Jani White says this type of exercise allows people to build a better relationship with their body and build their self-esteem. “It makes patients focus on what their body can do, rather than how their body looks.”

In this event the person has lost the many advantages associated with exercise. But having the support of trainers and nutritionists, like those at Fernwood, can help lay exercise addictions to rest. Belonging to such a community can also avoid feeling of isolation, which are common among suffers of mental illnesses.

White says joining in exercise activities can be an important medium for building friendships and contact with a community. “When people are isolated by mental illness or indeed for any reason they miss out on valuable information about themselves that is really only discovered in relationships with others.”

“Simple interactions can convey respect, enjoyment, care and interest and these have the capacity to challenge self-doubt and beliefs that maintain a low self-esteem. In isolation this doesn’t happen and social skills become a bit rusty adding another incentive to avoid social contact”, says White.

Sue Koszeghy admits being part of the Fernwood community has also helped her overcome her condition. “You have amazing friendships at Fernwood and the staff know you personally.  I think I really need that sort of connection,” says Koszeghy.

Exercise can be a fun social activity that gives patients the opportunity to develop new skills and physical confidence.  For some exercising alone can prove too difficult, which is why classes, sessions with a personal trainer or team sports offer a good alternative to running on the treadmill, and the best opportunity for social connectedness.

If there was ever any doubt in your mind about the legitimacy of exercising to exorcise your demons, the overwhelming evidence should put your mind to rest. In various papers the National Institute of Mental Health, the International Society of Sport Psychology, and other authorities have proclaimed that exercise is good for our mental health.

When we’re psychologically depressed, we’re behaviourally depressed. The more we withdraw, the less we do, and that depresses us even more until we find it impossible to break free of the vicious cycle. The simple antidote:  Be more active.

If you have a serious mental health issue, while exercise is a great part of your recovery program, it’s important you work with a therapist to clear out the root cause of the mental health issue. For more information, click here.