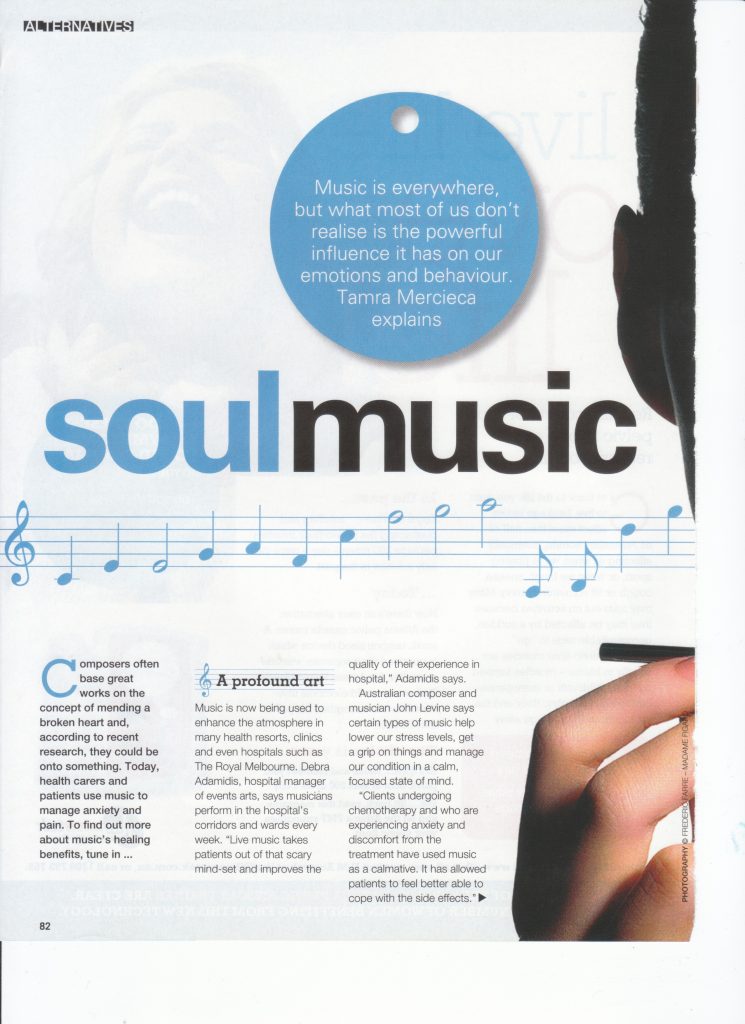 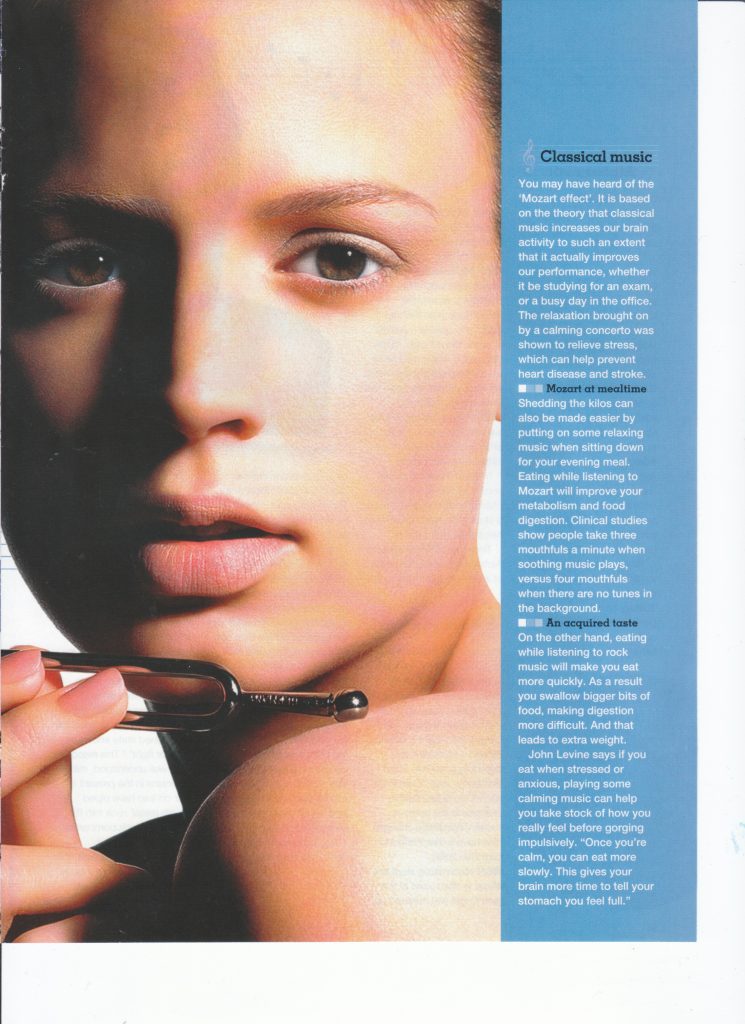 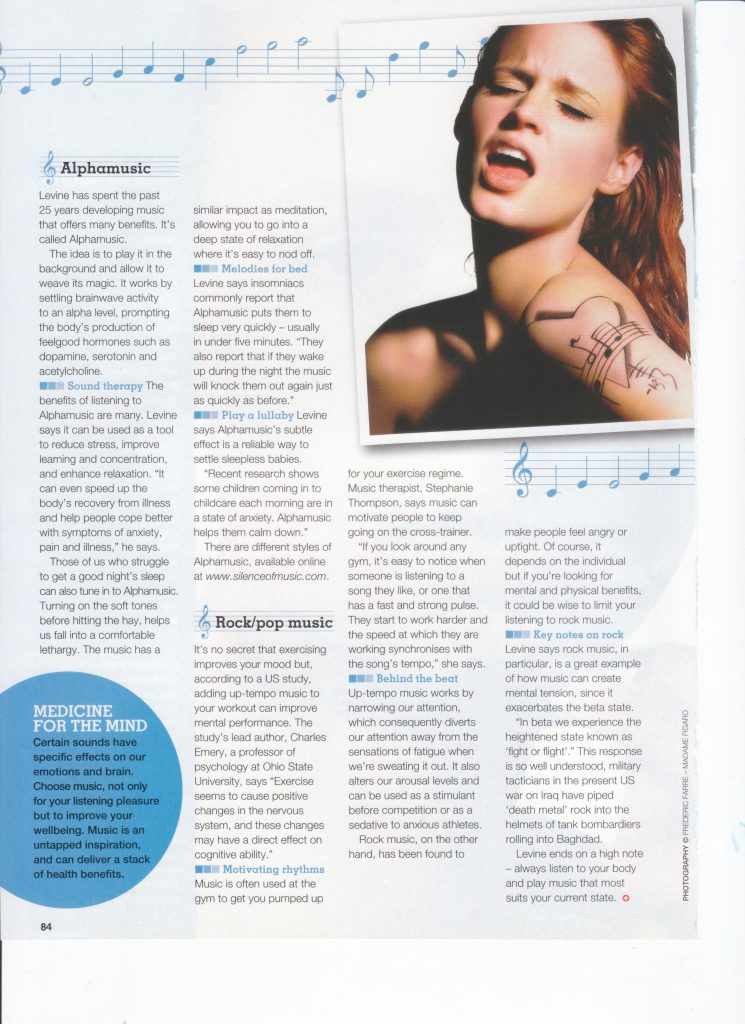 Music. You can’t escape it – it’s everywhere. But what most of us don’t realise, is music can have a very powerful influence on our emotions, moods and behaviour. Tamra Mercieca explains.

Songwriters and composers often base great works on the idea of mending a broken heart and according to recent medical research, they could be onto something. Today, medical practitioners and patients all over the world, use music in their anxiety and pain management programs.

Music is now being used to enhance the atmosphere in health resorts, clinics and even hospitals such as the Royal Melbourne. The hospitals’ manager of Events Arts, Debra Adamidis, says musicians perform in the hospital’s corridors and wards every week. “Live music takes patients out of that scary mind-set and improves the quality of their experience in hospital,” Adamidis says.

Australian composer and musician John Levine says certain types of music help lower our stress levels, get a grip on things and manage our condition in a calm, focused state of mind. “Clients undergoing chemotherapy and who are experiencing fear, anxiety and discomfort from the treatment regime have used music as a calmative. It has allowed the patients to feel better able to cope with the side effects.”

Levine has spent the last 25 years developing a form of music that offers a range of benefits – it’s called Alphamusic. While you can listen to Alphamusic, the idea is to put it on in the background, and allow it to weave it’s magic. It works by settling brainwave activity to a predominantly alpha level, prompting the production of feel-good hormones such as dopamine, serotonin and acetylcholine.

The benefits of listening to Alphamusic are many. Levine says it can be used as a tool to reduce stress, improve learning and concentration, and enhance relaxation. “It can even speed up the body’s recovery from illness and help people cope better with symptoms of anxiety, pain and illness,” he says.

Those of us who struggle to get a good night’s sleep can also benefit from Alphamusic. Turning on the soft tones before hitting the hay, relaxes the body and helps us fall into a comfortable lethargy. The music has a similar impact as meditation, allowing you to go into a deep state of relaxation where it’s easy to nod off.

Levine says insomniacs commonly report that Alphamusic puts them to sleep very quickly – usually in under five minutes.  “They also report that if they wake up during the night the music will knock them out again just as quickly as before.”

Levine says infants respond well to Alphamusic’s subtle effects – it is a reliable way to settle sleepless, irritated babies. “Recent research also shows that children coming in to childcare each morning are in a heightened state of anxiety – Alphamusic is an excellent way of helping them calm down.”

There are different styles of Alphamusic, which can be bought from www.silenceofmusic.com

You may have heard of the ‘Mozart Effect’ before. It is based on the theory that classical music increases our brain activity to such an extent that it improves our performance, whether it be studying for an exam, or a busy day in the office. The relaxation brought on by a calming concerto was shown to relieve stress, which in turn, can help in cases of heart disease and stroke.

Shedding the kilos can also be made easier by putting on some relaxing music when sitting down for your evening meal. Eating whilst listening to Mozart will improve your metabolism and food digestion. Clinical studies show people take about three mouthfuls a minute when soothing music plays, versus at least four mouthfuls when there are no tunes in the background

On the other hand, eating while listening to rock music will make you eat faster. As a result you swallow bigger bits of food making it harder for your stomach to digest the food. And that, inevitably, leads to extra weight.

John Levine says if you are a person who eats when stressed or anxious, then putting on some claming music can be one of the things you use to help you calm down and take stock of how you really feel, before you reach out impulsively for something to eat. “Once you’re calm, you can focus and eat more slowly. This gives your brain more time to tell your stomach you feel full.”

So, next time someone offers you tickets to the symphony, don’t discount the culture, it may be good for your health.

It’s no secret that exercising improves your mood, but add some up tempo music to your work out and one particular study has linked the pair with an increase in mental performance. Charles Emery, is the study’s lead author and a professor of psychology at Ohio State University. “Exercise seems to cause positive changes in the nervous system, and these changes may have a direct effect on cognitive ability,” he says.

Music is often used at the gym to get you pumped up for your exercise regime. Music therapist, Stephanie Thompson, says music can be used to motivate people to keep going on the cross trainer.

“If you look around any gym, it’s easy to notice when someone is listening to a song they like, or one which has a fast and strong pulse. They immediately start to work harder and the speed at which they are working becomes synchronised with the tempo of the song,” she explains.

Up tempo music works by narrowing our attention, which as a consequence, diverts our attention away from the sensations of fatigue when we’re sweating it out. It also alters our arousal levels and can therefore be used as a form of stimulant prior to competition or as a sedative to calm over-anxious athletes.

Rock music on the other hand, has been found to make people angry, or uptight. Of course it depends on the individual, but if you’re looking for mental and physical benefits, it could be wise to limit your listening to rock or heavy metal.

Levine says rock in particular, is a great example of how music can create mental tension, since it exacerbates the beta state.  “In beta we experience the heightened state of awareness known as ‘fight or flight’.”

This response is so well understood, military tacticians in the present US war on Iraq, have piped ‘death metal’ rock directly into the helmets of tank bombardiers rolling into Baghdad. That is why it is important to listen to your body and put on music that is the most suitable for your current state.

Music is the medicine of the mind

Listening to music can rev you up or calm you down, depending on the rhythm and tempo. But certain sounds have particularly strong effects on our emotions and brain. Learn to choose music, not only for your listening enjoyment, but to improve your wellbeing. Music is often an untapped source or motivation and inspiration, and can deliver a stack of health benefits. Happy listening!

Want to read about the healing benefits of swing dancing? Click here.