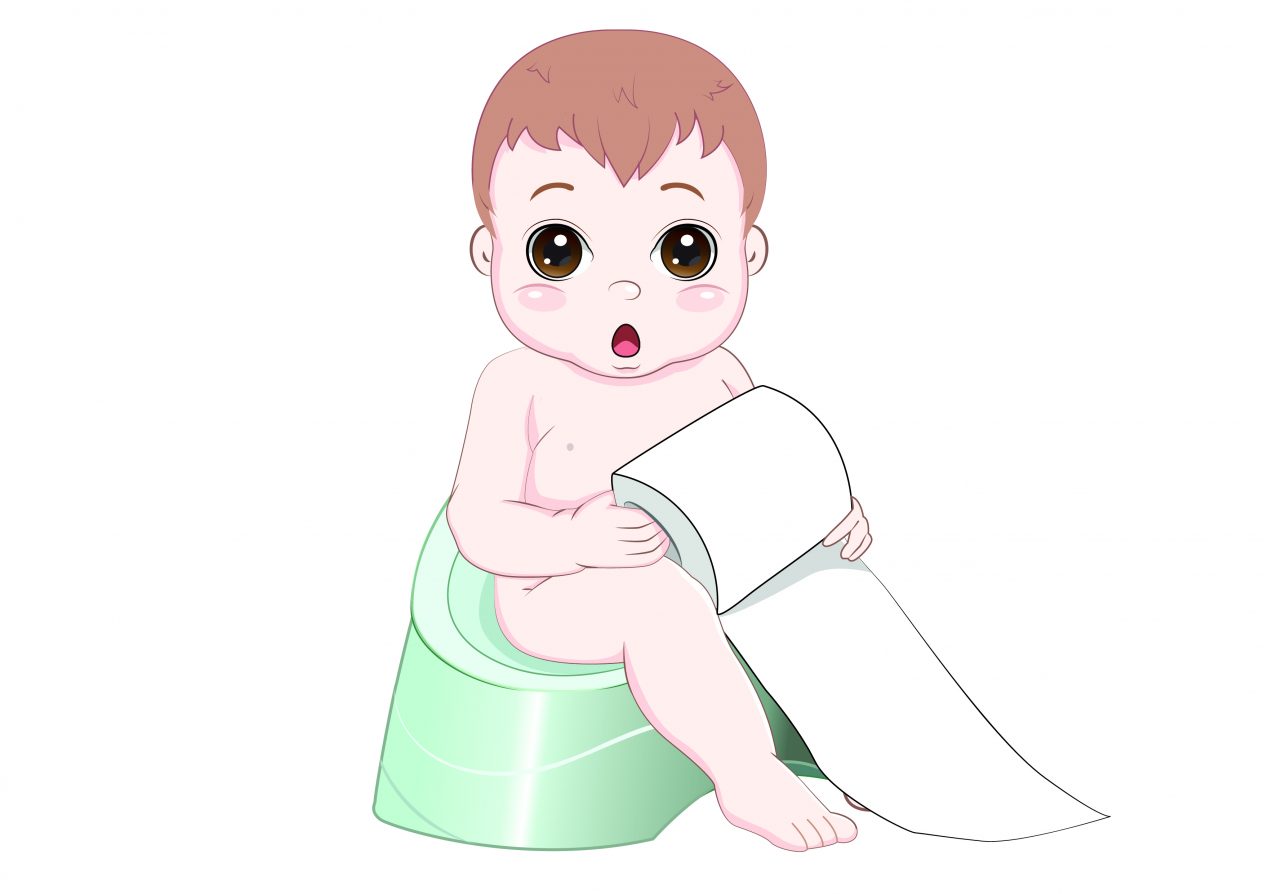 I was first told about Elimination Communication or EC from my doula; my birth support person.

She shared how Elimination Communication was where you learned how to read your babies vocal and bodily signals to know if they were about to pee or poop so they could be placed on the potty to relieve themselves.

And apparently this was possible right from birth!

While that sounded fantastic – imagine the washing we would save given we had planned to use Modern Cloth Nappies – this was my first baby, and I just wanted to get the parenting basics down pat, before I tried tuning into my baby’s elimination requirements!

So I pushed Elimination Communication to the back of my mind.

Yet, I felt that these two bum issues were trying to tell me something.

What was that thing that my doula had mentioned?

Maybe I should look into it a little more.

So I watched a couple of U-tube videos on it, got out a bucket and that Sunday afternoon got started.

I was amazed at our early success.

I’d thought catching the poos would be fairly easy as we’d already begun taking his nappy off in time for him to poo onto the change table.

I had no idea how I would catch them.

To my surprise it was just noticing a difference in his mood.

For instance, we’d be playing and then his mood would suddenly change.

When I popped him over the bucket, sure enough, he did a wee!

And every time he’d wait until he was over the bucket before he began.

So there was no spills.

I was gob-smacked, as was my husband when he came home that night and saw our little man in action.

Within 3 days we were at around an 80% catch rate.

Suddenly we understood why Zen’s mood would suddenly change to fussing about or looking at us with a touch of disdain.

What was even easier, was catching the pees at night!

We were co-sleeping, so I noticed each time before Zen would wake he would spend time squirming about.

I’d had no idea at the time, that he was squirming because he was trying not to wet his nappy.

So I began doing Elimination Communication at night.

Most nights catching all but one pee.

(You can solely do daytime Elimination Communication with great success, so don’t worry about losing sleep peeps).

Yet the best one was to come.

On day three, we went to Parents Group without our potty (which had just arrived to replace our bucket).

About an hour in, he gave me the ‘poo look’.

Oh, he’d have to do it in his nappy I thought to myself as I packed up and left for home.

During the ten minute walk home, he was restless and a little teary, despite being happy and relaxed for the past 90-minutes.

As soon as I got home I opened his nappy, which was still dry, and put in him on the potty.

Out came the poo.

He’d waited the ten minute walk home to do his poop!

I was seriously gob-smacked now.

The more I read about Elimination Communication, the more I learnt that babies do have the ability to hold on.

Within the first few weeks they develop sphincter control.

And they will wait ’til you get them to their potty if you act on their signals early enough.

What I also noticed is that I felt more connected to Zen.

And he seemed to trust me even more than before.

Which made sense, because he felt listened too.

Of course he did!

What baby wants to sit in their poo or wee!

It made me question: Where had this idea to wrap a nappy around a child’s bottom for them to eliminate in, come from?

We were the only mammal that did it!

In fact, if you looked at other mammals they would never eliminate in their nest.

The more my husband and I practised Elimination Communication, the more we wondered: Why doesn’t everyone do this?

It just made sense.

Not only were we saving on washing our mod cloth nappies (and for people using disposables, saving heaps of money and the environment) we were becoming more connected to our baby.

Plus, there would be no need to potty train later, because he would naturally learn that poop and wee go in the potty, not in his pants.

When a child wears nappies for the first few years of their life, we essentially train them to poop and wee themselves.

They are conditioned to believe that the nappy is their toilet.

Yet babies are born with the instinct not to pee or poop themselves, you or their bed.

They come out of the womb disliking feeling soiled and prefer to maintain good overall hygiene.

Practising Elimination Communication – even if you have more misses that catches – means your baby gains much earlier potty independence.

When parents practised Elimination Communication they were essentially enabling the baby to maintain communication with their bodily sensations.

That’s why most babies that practise Elimination Communication are completely out of nappies by 12-18 months!

And according to the experts in the field, Elimination Communication actually contributes to the baby’s development, with parents consistently reporting enhanced mobility, language development, social confidence, and self-esteem.

When you think about it, what did people do before the invention of nappies?

For 200,000 years babies communicated their needs so mum and dad could help keep them and their bed dry.

And our fellow humans in parts of India, Africa, South America, China and all other regions inhabited by indigenous or third world people still potty babies from day one.

They have no need for nappies

Yet most Westerners have lost their potty wisdom.

So if you’re open to re-learning an old art – re-connecting with this evolutionary instinct – there are ways to practise Elimination Communication in the modern-world.

Check out her website as she has a heap of valuable resources.

Even if your baby isn’t a newborn anymore, you can start Elimination Communication anytime up to 18 months of age.

But if you can get in before 4-months, it’ll be easier, as you won’t have conditioned your baby to go in his/her nappy.

If you’re not at home with your baby every day like we are, you can still do Elimination Communication part-time.

Don’t think you’ll be able to catch the cues?

All it takes is practise, and you can also rely on particular timings to catch many of the pees and poops.

So how are we going almost three months in?

Still practising Elimination Communication and super grateful for having being told about it.

We have good days and better days.

While some days we only catch 50% of the pees and poops, that’s 50% less nappies to wash, and we’re continuing to allow our little munchkin build a healthy relationship with his eliminating needs.

As a wonderful non-profit group shares on their website:

‘Elimination Communication is NOT potty training.

It is a gentle, natural, non-coercive process by which a baby, preferably beginning in early infancy, learns with the loving assistance of parents and care-givers to communicate about and address his or her elimination needs.

There’s no ‘training’ involved; training which can have long-term impacts on the baby’s health once they grow up.

As I’ve found in my work with women’s sexual health, many lady’s bladder and bowel concerns originate from how their were conditioned to poop and pee when they were potty trained.

Many forming a negative relationship with their genitals during the process 🙁

Oh, so many reasons to give Elimination Communication a go!

Elimination Communication really is a practice in listening, connecting and loving; skills that all of us could brush up on to create a more a love-filled world.