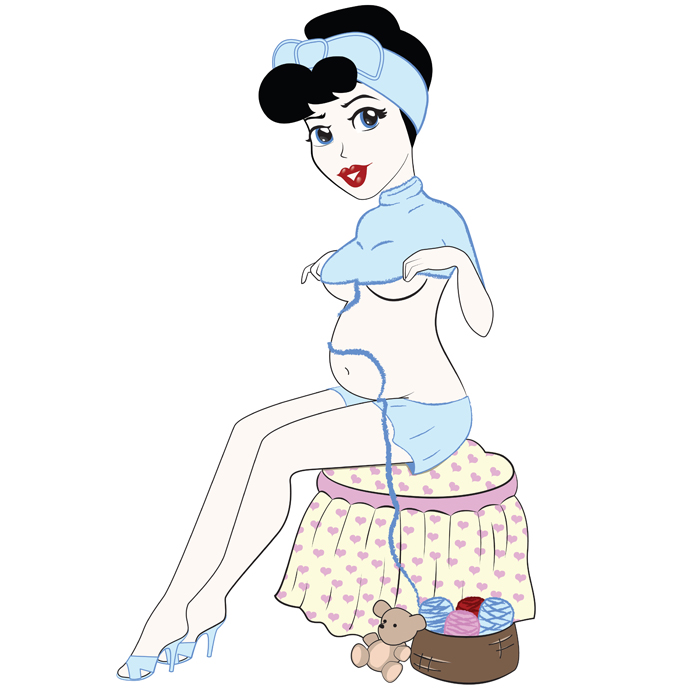 When I first saw the cross show up on the pregnancy test, I was excited.

My husband and I both.

We’d wanted to have a child sometime soon, and now we had a baby in my belly.

We began telling people straight away.

I know the general rule is wait ‘till you’re out of the danger zone at 3-months, but our philosophy was that we’d prefer to let people know, so that if something unfortunate was to happen, we would have the emotional support to work through it.

So we got on the phone over the next two weeks, telling our close family and friends first, and one of the first questions to me was: ‘How are you feeling?’ with a touch of sympathy in their voice.

‘Great!’ I replied, which at the time was the honest truth.

My mum had never had morning sickness, so I was using that fact to fuel my belief that neither did I have to experience nausea.

Nope, this would be a smooth ride!

Or so I hoped.

We began meeting with midwives for a planned home birth, by which time I began starting to feel a little under the weather.

‘Oh that’s a good sign. It means everything is going well’, one of them said.

As much as I didn’t want to take that on, subconsciously I did.

And over the next few days I started to feel even worse.

I wasn’t vomiting, not even close.

The only time it let up, was when I was eating, and I didn’t want to be eating all day when I wasn’t hungry.

Ummmmm… not sure sure where the ‘morning’ came from.

Not rising before 9am each morning, I was lucky, working for myself I could sleep as required, with naps becoming a regular afternoon occurrence.

But it wasn’t so much the exhaustion that got me down, as it was this constant nausea.

It wasn’t severe, but it was constant, never letting up, and after a few weeks of this, I began to feel really disheartened.

My inspiration for life – for anything really – disappeared, which for me was HUGE.

Inspiration is my way of life; I am always inspired about something.

Even if it is just something small like finding a cool new vintage pattern to sew.

Yet right now, I didn’t want to do anything.

But I also didn’t want to do nothing.

Even romance-loving me found it difficult to just sit back and watch a chick-flick.

I wanted to escape my body.

I just wanted the sickness to end, but at the same time, I sort of didn’t because hey, the sick feeling meant that baby was cooking perfectly!

And so unconsciously I began collecting evidence for this.

I met with a girlfriend who had previously had a miscarriage.

She shared how she lost the baby at 8 weeks, and she hadn’t experienced any of the pregnancy symptoms I was describing to her.

And this bit of evidence I hung onto.

I started believing, in order to keep my baby, I needed to go through this nauseous period.

That meant that my baby was healthy.

Despite acupuncture always serving me well, I decided not to go to acupuncture, not wanting to stuff up the natural process of my baby-making.

I convinced myself that I just needed to suffer, and that was simply part of pregnancy, while at the same time wishing it would end, but secretly being scared shitless if it did, that that might be a sign that I’d lost the baby.

What message was I sending to my body?

You need to suffer right now, and that is perfectly fine, as that means we are building a healthy baby.

The more I talked to my friends, the more they shared how horrendous their first three months had been.

Why had no one spoken of this before?

Because most people don’t tell people they’re pregnant this early, so by the time they share the big news, they’re generally feeling better.

My evidence was growing.

Clearly, this was something ALL women experienced; it just wasn’t spoken about.

That meant what I was experiencing was normal.

By week 10, things started to get worse for a few days.

I asked the universe to take care of it for me – not quite sure whether that would work – and the very next day I felt better.

My good run lasted for 3 days, before my usual nausea kicked right back in.

That week I received an email from my doula – the birth support person I had employed – with some tips on how to work through the nausea, such as booking in for acupuncture.

I’d already thought of that, but I’d decided not to.

I even felt a little angry.

What had sparked that?

Me feeling powerless, that’s what.

We only ever get angry when we feel powerless.

It was while sitting outside in the sunshine, contemplating, that I realised the problem…

I had a belief of: I must experience nausea in order to have a healthy pregnancy.

Now if you’ve been following me for a while, you know that clearing beliefs, so we can let go of the struggle, is at the core of the work I do.

Why hadn’t I picked ip up earlier?

But I was so damn scared to losing the baby, that I pushed it back down and carried on with my nauseous feelings, thinking ‘It’s ok, I’m making a baby’.

This is just an example of how fear can get in the way of us seeing a solution.

In my case, clearing the belief that I had to struggle through my pregnancy, so I could feel ok with booking in for some acupuncture, which deep down I knew would help.

We all have beliefs that cause struggle in our life.

We take on beliefs about life being hard, money being hard to come by, bodies being impossible to heal, and so forth.

When in truth, if we change our beliefs, we start seeing the opportunities that will help us create the change we’re after.

And maybe like me, you’re holding onto a belief, because it’s serving a purpose.

Even if it is an unfounded purpose.

The more I explored this belief I was holding onto, the more I realised that, if the body is in an optimum state, and is firing on all cylinders, then there simply is no cause for nausea.

It was the nausea.

The nausea was the problem.

And I was letting it take away my quality of life.

I was allowing it to leave me feel this way.

I had things I could do.

Remove a belief or five, get some acupuncture and seek out more information on helpful remedies.

But instead, I was letting negative pregnancy stories dictate my actions.

The people we surround ourself with, really do have a big influence on our psyche.

If they are constantly saying negative things, then we are likely to absorb those things, and they eventually begin to become our truth.

In my case, I believed so much that I needed to feel nauseous to have a healthy baby, that that’s what I started creating in my body.

What I’m saying, is if you notice this happening, make sure you surround yourself with people who are having positive experiences in your trouble area.

Or if you just want to get right on in there and clear the belief you can do that to.

This is something I teach in my Remarkable Relationships course, next running May 2018.

Let’s not operate on borrow beliefs any longer!

What happened once I removed this belief?

I took myself off to a Pregnancy Circle and received some great advice about eating a protein snack right before bed, to ensure baby was getting enough fuel (which made sense given how much I was sleeping).

The day after trying this I felt better.

I finally booked in for acupuncture which worked a treat.

My inspiration or life returned, and surprise surprise, pregnancy began to get easier.

Because I was now open to solutions.

I was no longer operating with this limiting belief; letting it block my view of what was possible for me.

To feel good AND have a healthy baby!

As it turns out, the 13-week scan revealed a super healthy little being in my belly!!

I hope this blog, helps to help you see beyond any current problems you may be facing; any limiting beliefs.

The more we can create a supportive community that supports health and happiness, the more we experience a more nourishing life.

6 Comments on “How I overcame nausea during pregnancy.”