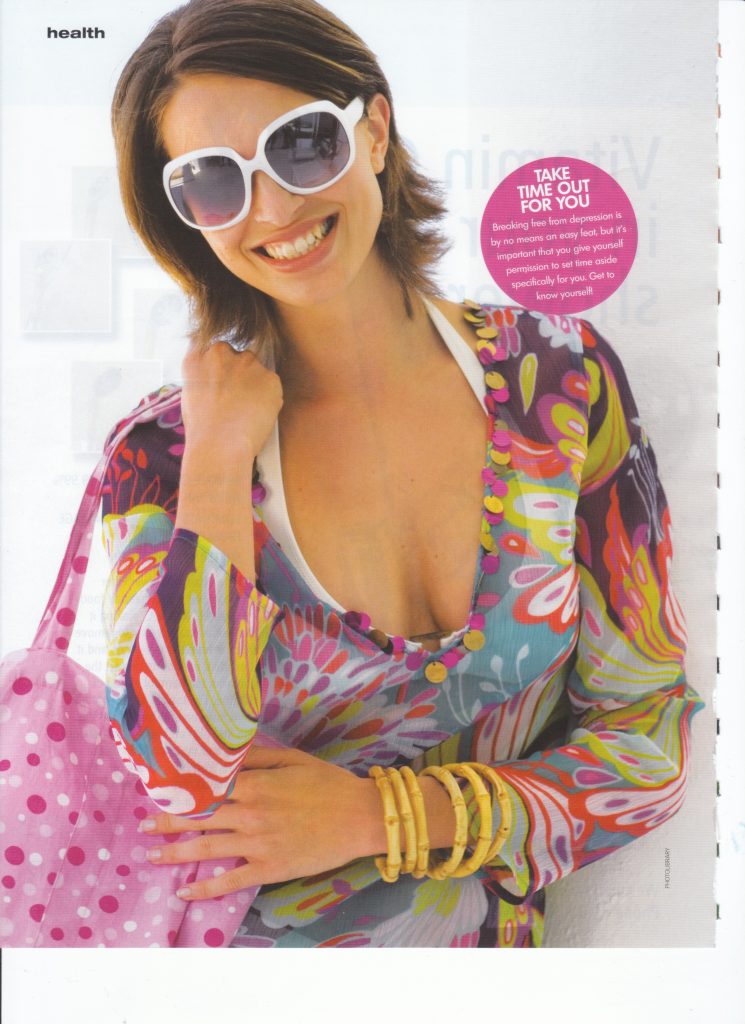 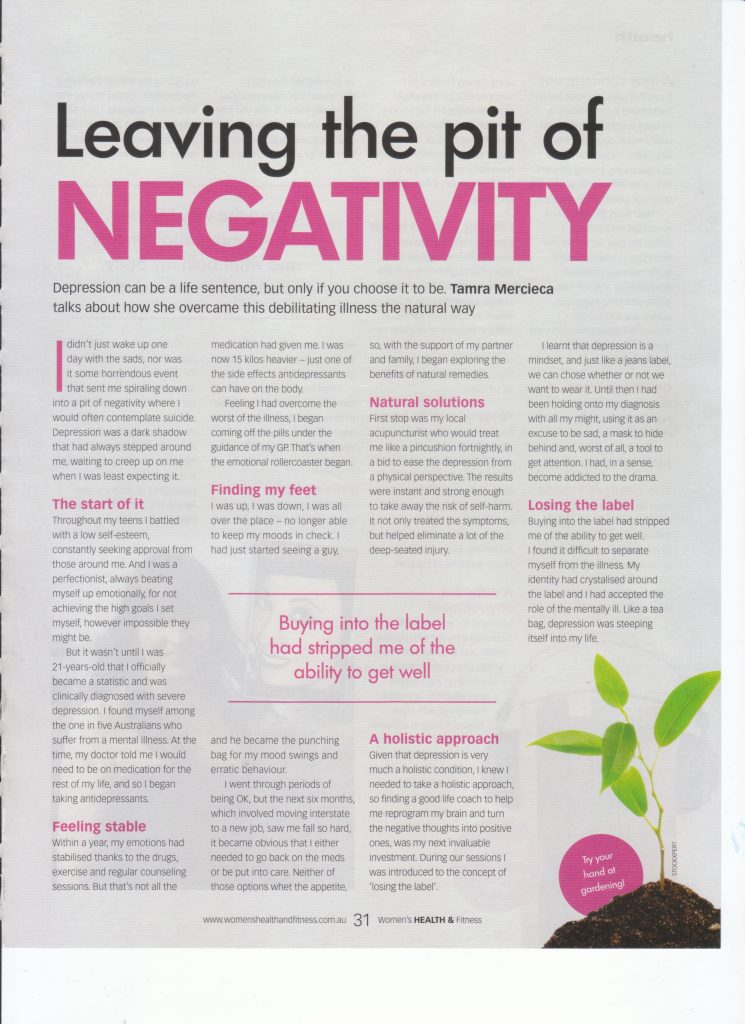 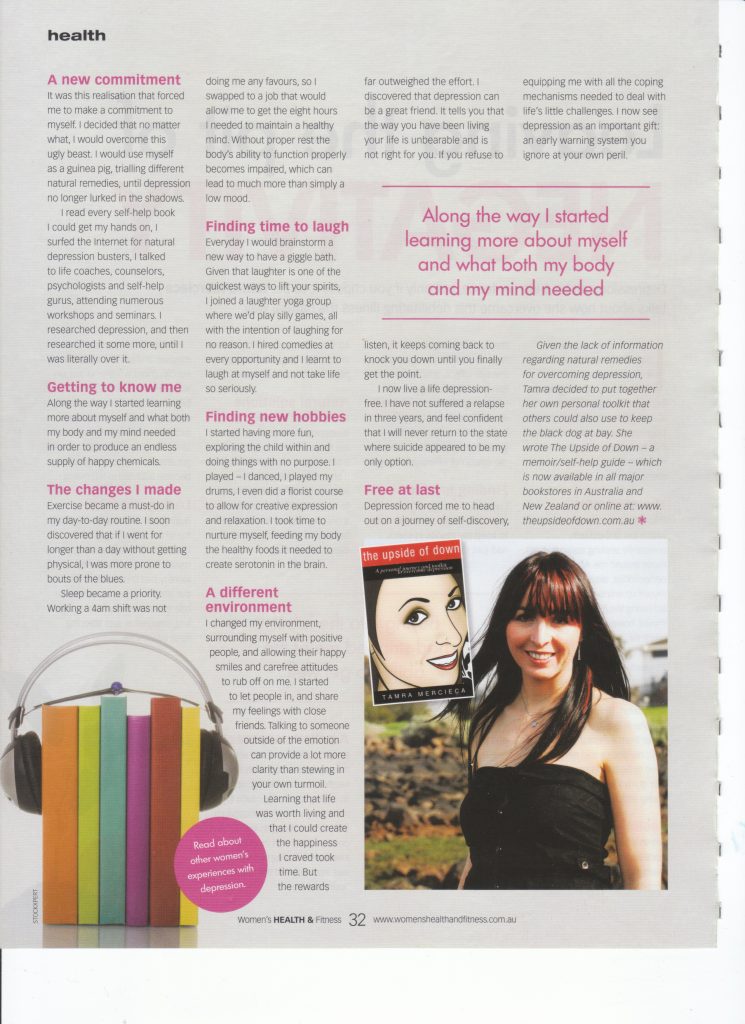 Leaving the pit of negativity

Depression can be a life sentence, but only if you choose it to be. Tamra Mercieca talks about how she overcame this debilitating illness the natural way and how you can let go of the negativity too.

I didn’t just wake up one day with the sads, nor was it some horrendous event that sent me spiraling down into a pit of negativity where I would often contemplate suicide. Depression was a dark shadow that had always stepped around me, waiting to creep up on me when I was least expecting it.

Throughout my teens I battled with a low self-esteem, constantly seeking approval from those around me. And I was a perfectionist, always beating myself up emotionally, for not achieving the high goals I set myself, however impossible they might be.

But it wasn’t until I was 21-years-old that I officially became a statistic and was clinically diagnosed with severe depression. I found myself among the one in five Australians who suffer from a mental illness. At the time, my doctor told me I would need to be on medication for the rest of my life, and so I began taking anti-depressants.

Within a year, my emotions had stabilised thanks to the drugs, exercise and regular counseling sessions. But that’s not all the medication had given me. I was now 15 kilos heavier – just one of the side effects anti-depressants can have on the body.

Feeling I had overcome the worst of the illness, I began coming off the pills under the guidance of my GP. That’s when the emotional roller coaster began. I was up, I was down, I was all over the place – no longer able to keep my moods in check. I had just started seeing a guy, and he became the punching bag for my mood swings and erratic behaviour.

I went through periods of being OK, but the next six months, which involved moving interstate to a new job, saw me fall so hard, that it became obvious, that I either needed to go back on the meds or be put into care. Neither of those options wet the appetite, so, with the support of my partner and family, I began exploring the benefits of natural remedies.

First stop was my local acupuncturist who would treat me like a pincushion fortnightly, in a bid to ease the depression from a physical perspective. The results were instant and strong enough to take away the risk of self-harm. It not only treated the symptoms, but helped eliminate a lot of the deep-seated injury. The negativity I was experiencing lifted.

Given that depression is very much a holistic condition, I knew I needed to take a holistic approach, so finding a good life coach to help me reprogram my brain and turn the negative thoughts into positive ones, was my next invaluable investment. During our sessions I was introduced to the concept of ‘losing the label’.

I learnt that depression is a mindset, and just like a jeans label, we can chose whether or not we want to wear it. Until then I had been holding onto my diagnosis with all my might, using it as an excuse to be sad, a mask to hide behind and, worst of all, a tool to get attention. I had, in a sense, become addicted to the drama.

Buying into the label had stripped me of the ability to get well. I found it difficult to separate myself from the illness. My identity had crystalised around the label and I had accepted the role of the mentally ill. Like a tea bag, depression was steeping itself into my life, filling my cup with a whole lot of negativity.

It was this realisation that forced me to make a commitment to myself. I decided that no matter what, I would overcome this ugly beast. I would use myself as a guinea pig, trialing different natural remedies, until depression no longer lurked in the shadows.

I read every self-help book I could get my hands on, I surfed the Internet for natural depression busters, I talked to life coaches, counselors, psychologists and self-help gurus, attending numerous workshops and seminars. I researched depression, and then researched it some more, until I was literally over it.

Along the way I started learning more about myself and what both my body and my mind needed in order to produce an endless supply of happy chemicals. Exercise became a must-do in my day-to-day routine. I soon discovered that if I went for longer than a day without getting physical, I was more prone to bouts of the blues.

Sleep became a priority. Working a 4am shift was not doing me any favours, so I swapped to a job that would allow me to get the eight hours I needed to maintain a healthy mind. Without proper rest the body’s ability to function properly becomes impaired, which can lead to much more than simply a low mood.

Everyday I would brainstorm a new way to have a giggle bath. Given that laughter is one of the quickest ways to lift your spirits, I joined a laughter yoga group where we’d play silly games, all with the intention of laughing for no reason. I hired comedies at every opportunity and I learnt to laugh at myself and not take life so seriously.

I started having more fun, exploring the child within and doing things with no purpose. I played – I danced, I played my drums, I even did a floristy course to allow for creative expression and relaxation. I took time to nurture myself, feeding my body the healthy foods it needed to create serotonin in the brain.

I changed my environment, surrounding myself with positive people, and allowing their happy smiles and carefree attitudes to rub off on me. I started to let people in, and share my feelings with close friends. Talking to someone outside of the emotion can provide a lot more clarity, than stewing in your own turmoil.

Learning that life was worth living and that I could create the happiness I craved took time. But the rewards far outweighed the effort. I discovered that depression can be a great friend. It tells you that the way you have been living your life is unbearable and is not right for you. If you refuse to listen, it keeps coming back to knock you down until you finally get the point.

I now live a life depression-free. I have not suffered a relapse in three years, and feel confident that I will never return to the state where suicide appeared to be my only option. Depression forced me to head out on a journey of self-discovery, equipping me with all the coping mechanisms needed to deal with life’s little challenges. I now see depression as an important gift: an early warning system you ignore at your own peril.

Given the lack of information regarding natural remedies for overcoming depression and the negativity that it comes with, Tamra decided to put together her own personal toolkit that others could also use to keep the black dog at bay. She wrote The Upside of Down – a memoir / self-help guide – which is now available in all major bookstores in Australia and New Zealand or online at: www.theupsideofdown.com.au

If you would like to work with Tamra one-on-one, so you can overcome depression once and for all, in just 5-months, click here to learn more about her program.