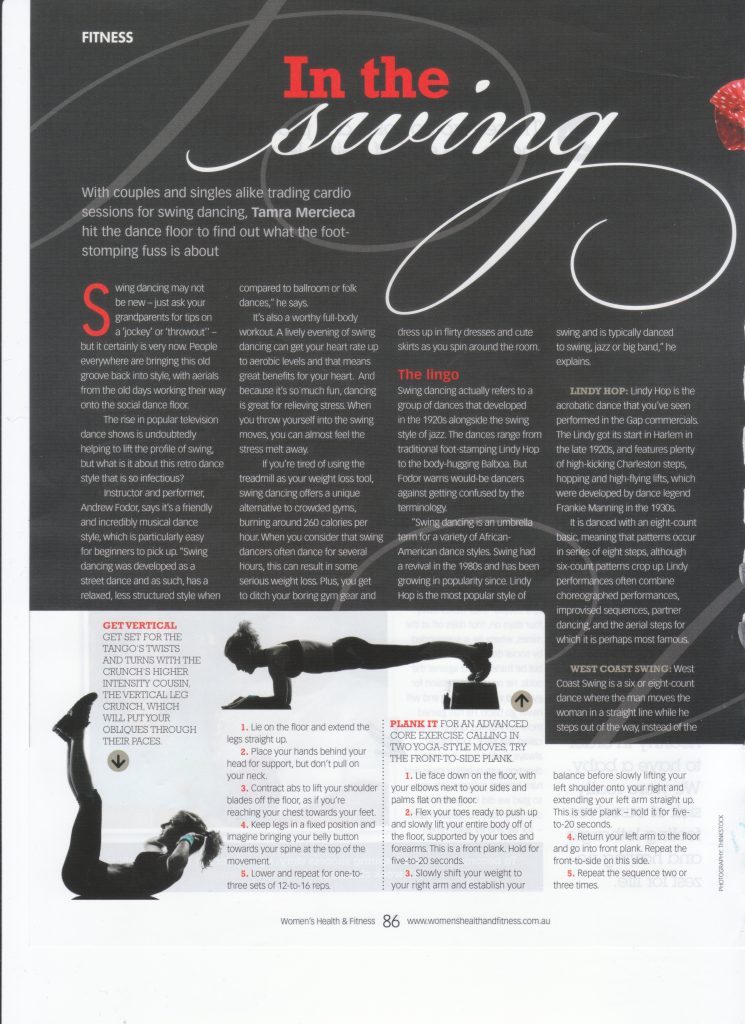 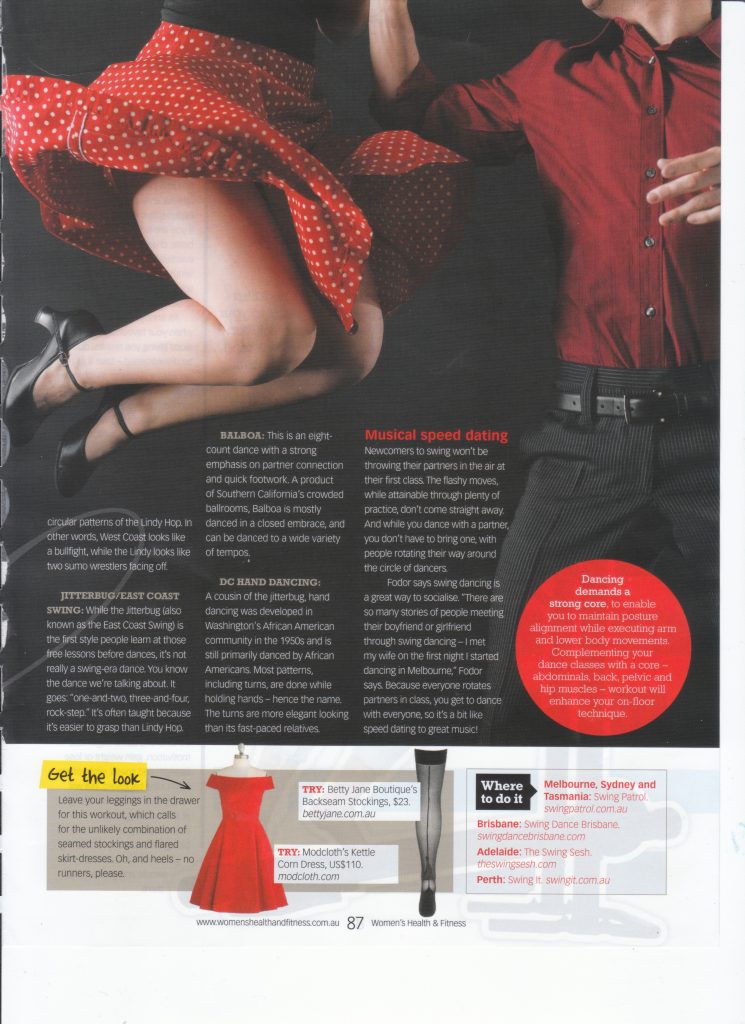 Swing dancing is making a comeback and it’s not just the infectious rhythm and foot-stomping moves drawing in the crowds. Tamra Mercieca decided to take a few classes to find out why swing fever is so infectious.

Swing dancing may not be new – just ask your grandparents for tips on a “jockey” or “throwout” – but it certainly is now. People everywhere are bringing this old groove back into style, with aerials from the old days working their way onto the social dance floor.

The rise in popular television dance shows is undoubtedly helping to lift the profile of swing, but what is it about swing that is so infectious, that people keep coming back for more?

Instructor and performer, Andrew Fodor, says it’s a friendly and incredibly musical dance style, which is particularly easy for beginners to pick up. “Swing dancing was developed as a street dance and as such, has a relaxed, less structured style when compared to Ballroom or folk dances.”

Swing dancing actually refers to a group of dances that developed in the 1920s alongside the swing style of jazz. The dances range from traditional foot-stamping Lindy Hop to the body-hugging Balboa. But Fodor says don’t get confused by all the different names.

“Swing Dancing is an umbrella term for a variety of African-American dance styles. Swing had a revival in the 1980s and has been growing in popularity since. Lindy Hop is the most popular style of swing and is typically danced to swing, jazz or big-band,” Fodor explains.

Lets break it down:

Lindy Hop:
Lindy Hop is the acrobatic dance that you’ve seen performed in the Gap commercials. The Lindy got its start in Harlem in the late 1920s, and features plenty of high-kicking Charleston steps, hopping and high-flying lifts, which were developed by dance legend Frankie Manning in the 1930s.

It is danced with an eight-count basic, meaning that patterns occur in series of eight steps, although six-count patterns crop up. Lindy performances often combine choreographed performances, improvised sequences, partner dancing, and the aerial steps for which it is perhaps most famous.

West Coast Swing:
West Coast Swing is a six or eight-count dance where the man moves the woman in a straight line while he steps out of the way, instead of the circular patterns of the Lindy Hop. In other words, West Coast looks like a bullfight, while the Lindy looks like two sumo wrestlers facing off.

Jitterbug/East Coast Swing:
While the jitterbug (also known as the East Coast Swing) is the first style people learn at those free lessons before dances, it’s not really a swing-era dance. You know the dance we’re talking about. It goes: “one-and-two, three-and-four, rock-step.” It’s often taught because it’s easier to grasp than Lindy Hop.

Balboa: This is an 8-count dance with a strong emphasis on partner connection and quick footwork. A product of Southern California’s crowded ballrooms, balboa is mostly danced in a closed embrace, and can be danced to a wide variety of tempos.

DC Hand Dancing:
A cousin of the jitterbug, hand dancing was developed in Washington’s African American community in the 1950s and is still primarily danced by African Americans. Most patterns, including turns, are done while holding hands – hence the name. The turns are more elegant looking than its fast-paced relatives.

Social dancing is offered in most major cities now, with dance schools as crowded as the Roseland Ballroom was in the ’30s. Claudia Funder and Scott Cupit founded the Swing Patrol movement 12 years ago, after being disappointed by the lack of growth in the Australian swing scene.

“This whole thing just started with a genuine and breath-taking passion and love for the dance. We just wanted other people to dance with. We never dreamed Swing Patrol would become known as the largest swing school in the world”, says Funder.

Maybe it’s the high energy and youthful exuberance of the jumpin’ jivin’ style that’s attracting the younger folk. But at the end of the day, it’s all about interpretation. While the basic steps are the same, adding your own style and flare is key; and colourful facial expressions just adding to the fun.

Newcomers to swing won’t be throwing their partners in the air at their first class. The flashy moves, while attainable through plenty of practice, don’t come straight away. And while you dance with a partner, you don’t have to bring one, with people rotating their way around the circle of dancers.

It was the strong sense of community that drew Fodor to swing. “That, and the great friendships have kept me dancing for eleven years now.  And there’s always a chance you’ll meet someone swing dancing too!”

“There are so many stories of people meeting their boyfriend or girlfriend through swing dancing – I met my wife on the first night I started dancing in Melbourne! Because everyone rotates partners in class, you get to dance with everyone, so it’s a bit like speed dating to great music!”

Sweatin’ it out on the dance floor

A lively evening of swing dancing can get your heart rate up to aerobic levels and that means great benefits for your heart.  And because it’s so much fun, dancing is great for relieving stress. When you throw yourself into the swing moves, you can almost feel the stress melt away.

If you’re tired of using the treadmill as your weight loss tool, swing dancing offers a unique alternative to crowded gyms, burning around 260 calories per hour. When you consider that swing dancers often dance for several hours, this can result in some serious weight loss. Plus, you get to ditch your boring gym gear and dress up in flirty dresses and cute skirts as you spin around the room.

As the swing revival keeps rolling along, so are we seeing the return of classically flashy fashion, from zoot suits, high-waisted pants, gabardine shirts, paperboy hats and braces for men, to seamed stockings, flared skirt-dresses and flower accessories for women.

With authentic ‘40s and ‘50s threads becoming a little harder to come by in vintage clothing stores, due to the rising popularity of this elegant era, it’s no surprise that new swing kids are rifling through their grandparents’ closets in search of something to wear to their next social dance.