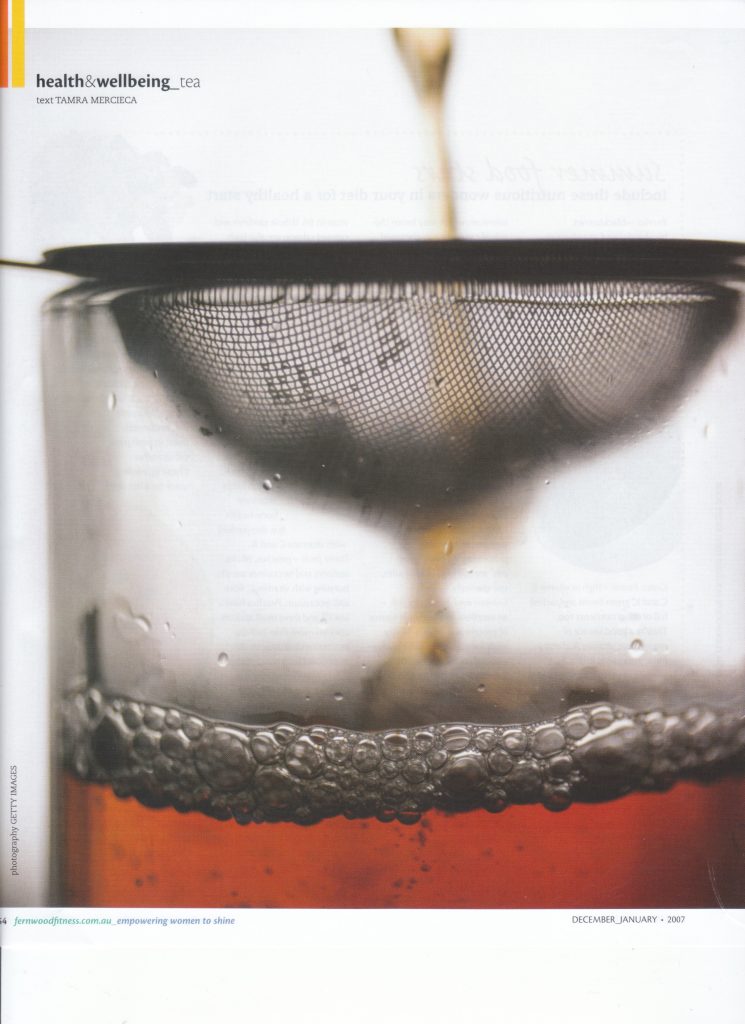 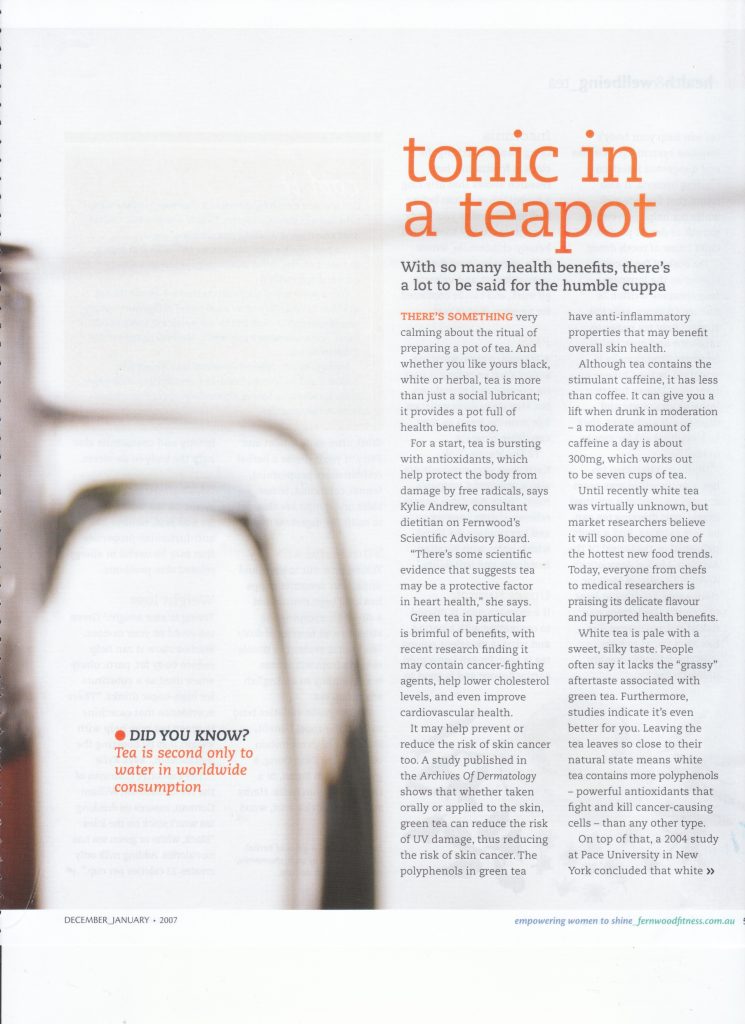 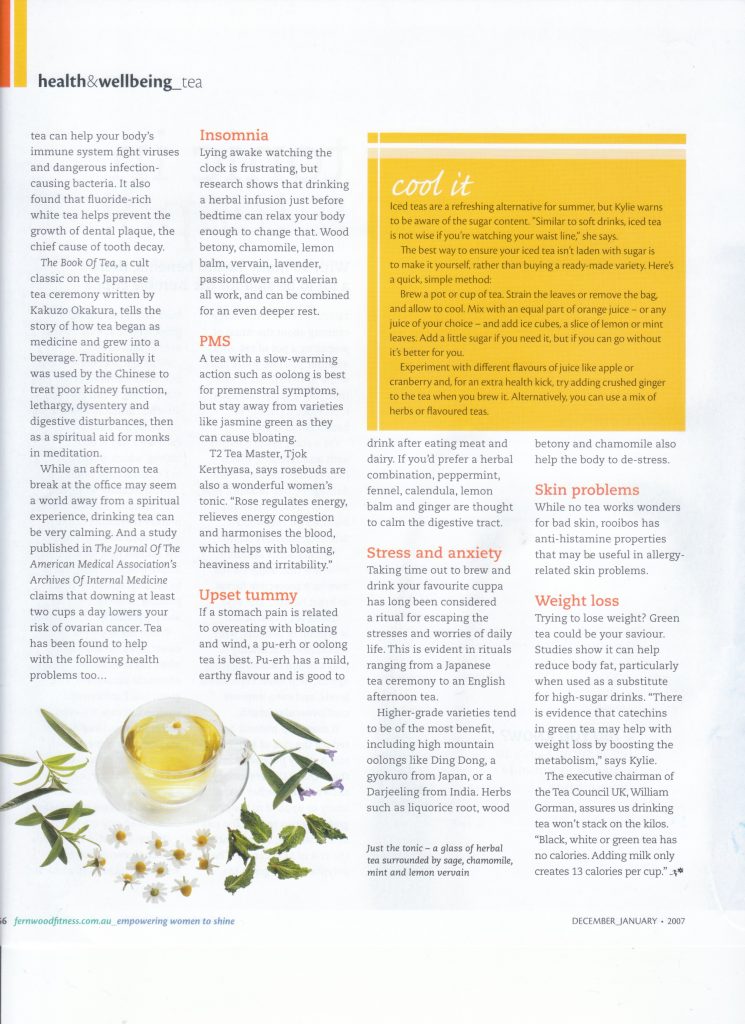 tonic in a teapot

Having a cup of tea may be a rarity you save for when you visit grandma, but with so many health benefits it really is a tonic for our health, with women from all walks of life are now making the switch. By Tamra Mercieca.

Sometimes worries keep us up at night or nervous tension causes stomach upsets. Anxieties can leave us tense and interfere with restful sleep. Often our automatic reaction is to reach for the coffee jar.

But not so fast! Before you give in to the temptation of a caffeine fix, which is bound to give you an instant high only to leave you feeling lethargic by midday, why not indulge in a cup of tea instead.

Tea is more than just a social drink, it provides a pot full of health benefits bound to improve your day at the office – whether that be meeting an important business deadline or getting the kids to footy practice on time.

The latest research shows that your daily cuppa provides you with antioxidants, contributes successfully to your daily fluid target and the low caffeine levels found in tea, means you need never feel guilty about reaching for the teapot.

Women have special needs and there are certain teas that address the demands and stresses particular to our bodies. From the onset of menstruation through pregnancy, and onto menopause, there are a variety of teas that help create a healthy and balanced lifestyle. Tea serves as a tonic for:

Many of us have experienced the frustration of lying awake all night watching the clock. But research shows that drinking the right tea before bedtime can relax our bodies enough to bring on the zeds. Herbal infusions that aid in a good nights sleep include chamomile, wood betony, lemonbalm, vervain, lavender, passionflower and valerian, and can be combined for an even deeper rest.

When it comes to menstrual problems a tea with a slow warming action such as oolong is best. But stay away from teas like jasmine greens as they can cause bloating.

T2 Tea Master, Tjok Kerthyasa, says rosebuds are also a wonderful women’s tonic. “Rose regulates energy, relieves energy congestion, and harmonises the blood, which helps with bloating, heaviness and irritability,” says Kerthyasa. Rosebuds have a sweet yet bitter flavour with a warm energy. It is most famous for its use in treating irregular menstruation.

If the upset tummy is related to overeating with bloating and wind, a pu erh or oolong tea is best. Pu erh has a mild and earthy flavour and is particularly good to drink after eating meat and milk products. But if you’d prefer a herbal combination, peppermint, fennel, calendula, lemonbalm and ginger are considered good for calming the digestive tract.

Taking time out to brew and then drink a cup of your favourite tea, whatever that may be, has long been considered a ritual for escaping the stresses and worries of the mundane world. This is evident in the rituals ranging from the Japanese tea ceremony to the English afternoon tea. That is why teabags just don’t cut it!

The higher-grade teas tend to be of the most benefit, including high mountain oolongs like ding dong, a gyokuro from Japan, or a Darjeeling from India. Herbs such as liquorice root, wood betony, and chamomile also help the body to distress.

Kerthyasa likes to use rare or exotic, loose leaf tea when unwinding after a hectic day. “A high mountain oolong, a white tea from Fujian, a lung ching from China, a gyokuro from Japan, or a Darjeeling from India are some of my personal favourites,” he says. But it pays to get the finer grades as you can really taste the difference.

While there is no tea that will work wonders for bad skin, rooibos has shown some anti-histamine properties which may be useful in allergy-related skin problems.

Pu erh and oolong teas are the best teas for aiding digestion. They both help to reduce cholesterol absorption, however, pu erh is considered the most potent in combating high cholesterol. Herbs that assist in digestion include peppermint, fenel, liquorice, star anise, ginger and lemonbalm.

If you’re looking to shed the kilos, green tea could be your saviour. Studies show it can help reduce body-fat and boost your metabolism. But swapping the softdrink for any type of tea will help you if you’re watching your weight.

The Executive Chairman of the Tea Council UK, William Gorman, assures us that drinking tea won’t stack on the kilos. “Black or green tea without milk has no calories and adding milk adds just 13 calories per cup,” he says.

To quote the great Okakura Kakuzo (and author of The Book Of Tea): “Tea began as medicine and grew into a beverage”. Traditionally it was used by the Chinese to treat poor kidney function, lethargy, dysentery and digestive disturbances, then as a spiritual aid for monks in meditation.

Recent research shows that green tea may contain cancer-fighting agents, while certain herbal teas claim to combat or soothe many maladies. The antioxidants in tea lower cholesterol levels, improve cardiovascular health and help guard against some cancers. Some experts believe its flavenoids may even inhibit the growth of plaque on teeth.

According to a study published in The Journal of the American Medical Association’s Archives of Internal Medicine, women who drink at least two cups of tea a day have a lower risk of ovarian cancer than those who don’t drink tea at all.

tea today is second only to water in worldwide consumption

With so many flavours available these days, you’re sure to find one that wets the palate (and gives you the health benefits of a health tonic). Try traditional favourites like peppermint or chamomile or tempt yourself with a modern blend such as berry ripe – a chocolate / berry sensation, or maybe Japanese sencha infused with vanilla.

Tea has often been regarded as a ‘social lubricant’, which is probably due to the way that it refreshes and invigorates both the mind and body in a gentle way, unlike the fast hit from a coffee.

Although many people believe the opposite, tea does contain less caffeine than coffee, in fact about half the caffeine content. Caffeine is a stimulant that can give you a lift and when it’s drunk in moderation can be a healthy addition to your diet. A moderate amount of caffeine a day is about 300mg which works out to be seven cups of tea!

British Occupational Psychologist Dr. Rebecca Newton, says tea is a great relaxing way for people to communicate effectively. “Tea is a natural social lubricant – it helps people relax and take the time out of their hectic work schedules to talk to one another and catch up. So it makes sense that one of the most effective ways to build a good reputation in the office is to make a refreshing cup of tea for colleagues,” she says.

Afternoon tea sessions are famous for being prolonged, peaceful affairs where anything can be discussed – from relationship troubles to what’s on for the weekend. Reflection and appreciation are often part of a tea drinking session, which is becoming rare in this fast-paced day and age. Hence why tea is more than just a physical tonic, it’s an emotional tonic too!

And for the uninitiated, there couldn’t be a better time to take up tea drinking, with Australia’s Biggest Morning Tea on this Thursday (May 25th).

Hint: The longer you steep your tea, the more beneficial compounds end up in your cup. So don’t steep yourself short – brew well to be well!

Once there lived a Chinese Emperor who believed that those who drank boiled water were healthier. Shen Nung was out one day when he stopped to rest. His servants began to boil him some water, when dried leaves from a nearby bush fell into the boiling water, turning it brown. As a scientist, the Emperor was curious about the new liquid and drank some, declaring that it gave one ‘vigor of the body, contentment of mind, and determination of purpose’. And so, according to legend, tea was created.