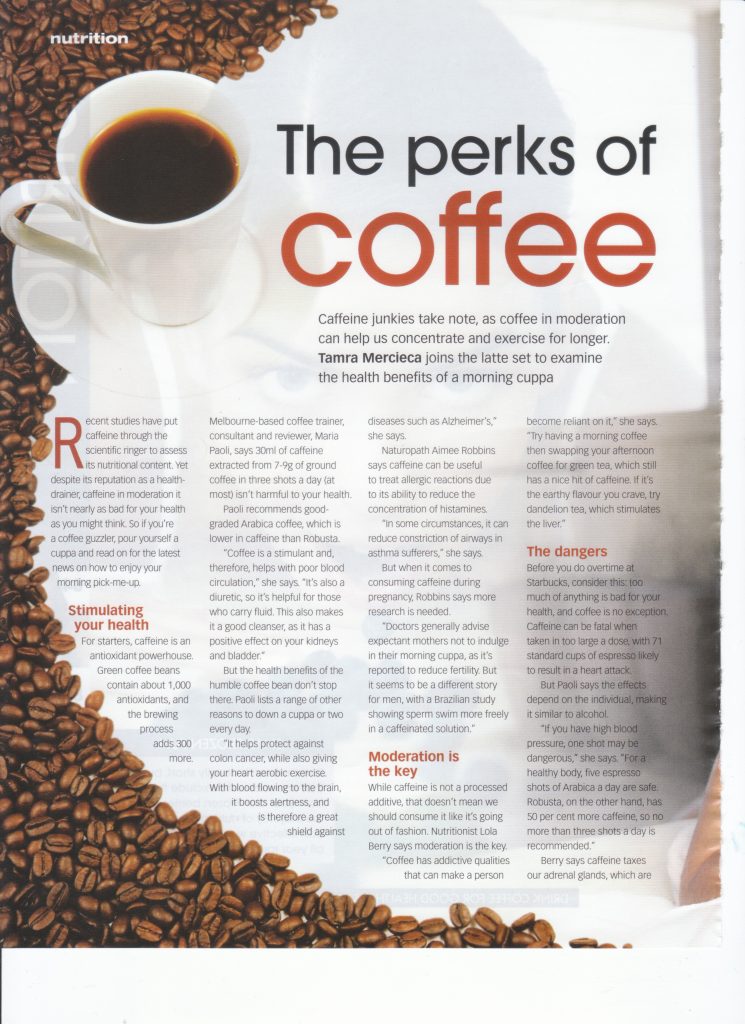 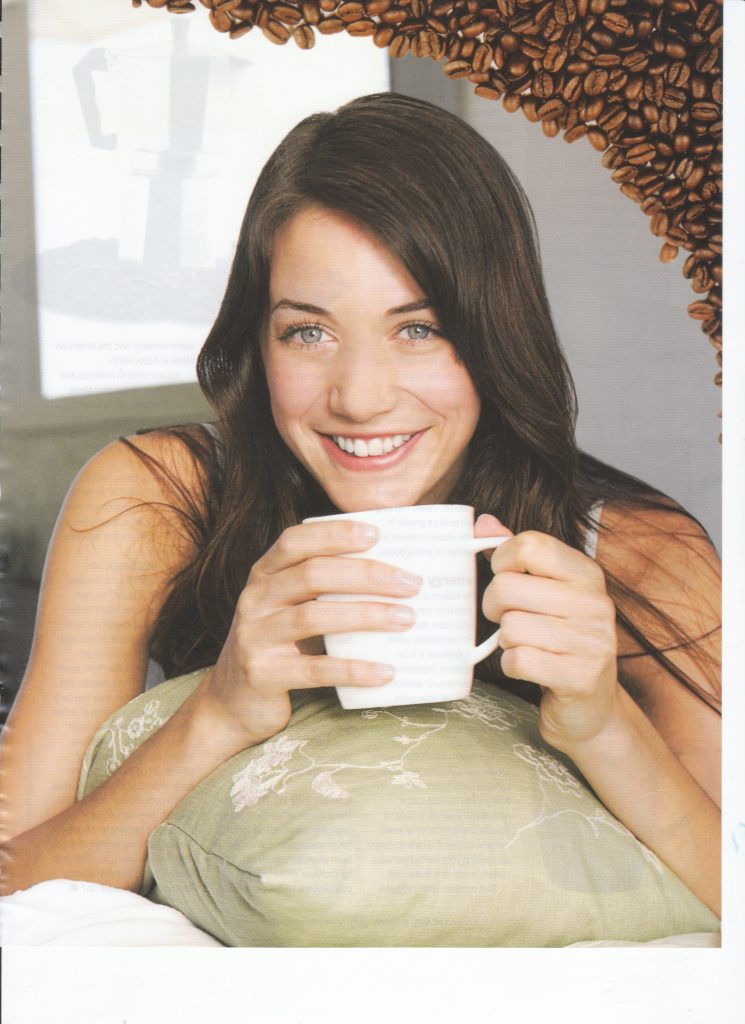 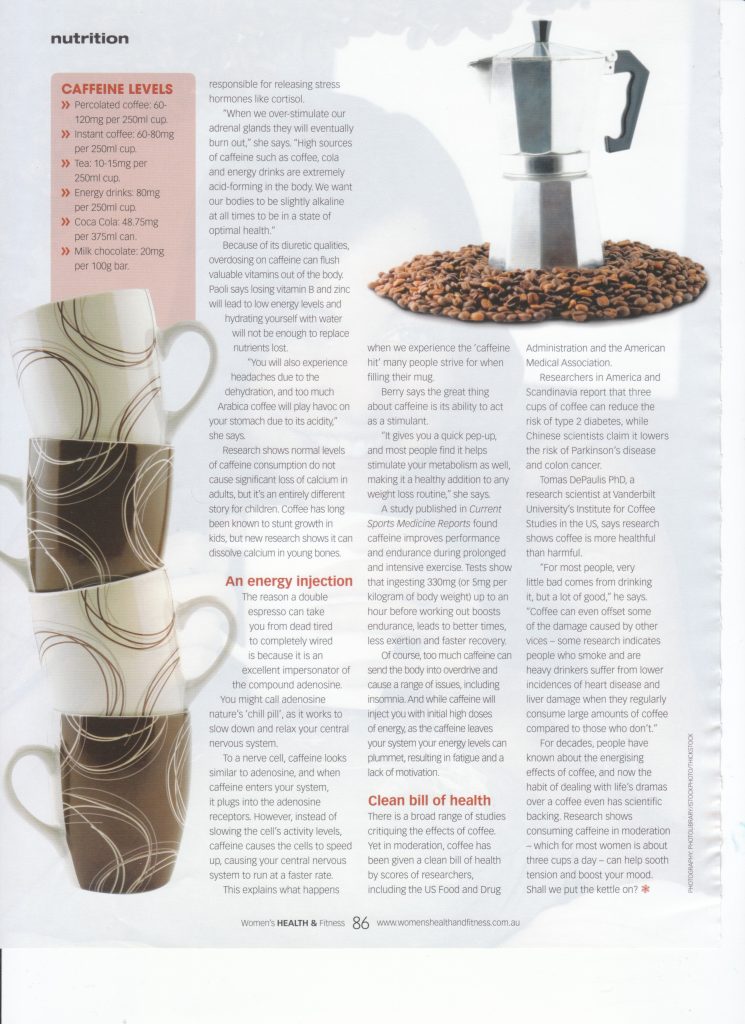 The truth about caffeine..

Coffee has been put through the scientific ringer, you might say, and almost invariably come out with flying colours. So if you’re a coffee guzzler, pour yourself a cuppa and read on for the latest good-to-the-drop news on how to enjoy your beloved beverage.

For starters, it’s an antioxidant powerhouse. Green coffee beans contain about 1,000 antioxidants, and the brewing process adds 300 more. Melbourne-based coffee trainer, consultant and reviewer, Maria Paoli, says if we extract 30ml from 7-9 grams and have at most three shots a day, then our bodies will love us.

Paoli recommends good graded Arabica, which is lower in caffeine than Robusta. “Coffee is a stimulus and therefore, helps with poor blood circulation. It’s also a diuretic, so it’s helpful for those who carry fluid. This also makes it a good cleanser, having a positive effect on your kidneys and bladder.”

But the health benefits of the humble coffee bean don’t stop there. Paoli rattles of a list of other reasons to down a cuppa or two each day. “It has positive effects against colonic cancer, while also giving your heart an aerobic exercise. With blood flowing to the brain, it boosts alertness, and is therefore a great shield against diseases such as Alzheimer’s.”

Naturopath Aimee Robbins, says caffeine can be useful in treating allergic reactions due to its ability to reduce the concentration of histamines. “In some circumstances, it can reduce constriction of airways in asthma sufferers.”

When it comes to pregnancy, Robbins says more research is needed. “Doctors generally advise mothers-to-be not to indulge in their morning cuppa, as it’s reported to reduce fertility by 50 percent. But it seems to be a different story for men, with a Brazilian study shows spermatozoa swims more freely in a caffeinated solution!”

moderation is the key

Caffeine in coffee is natural, coming straight from the earth. It’s not a processed additive. But that doesn’t mean we can consume it like it’s going out of fashion.

Nutritionist Lola Berry says moderation is the key. “Coffee has addictive qualities which can make a person become reliant on it.”

“Try having a morning coffee then swapping the afternoon coffee for a green tea, which still has a nice hit of caffeine. If it’s the earthy flavor you crave then try dandelion tea, which actually stimulates the liver,” says Berry.

the dangers of caffeine

Before you do overtime at Starbucks, consider this. Taken in too large a dose, caffeine can be fatal, with 71 standard cups of espresso (9 grams x 71 at 30mls) likely to give you a heart attack. But Paoli says too much depends on the individual, making it no different from alcohol.

“If you have high blood pressure one shot may be dangerous. For a healthy body five espresso shots of Arabica a day are safe. Robusta on the other hand, has 50 percent more caffeine, so no more than three shots a day is recommended.”

Berry says caffeine taxes our adrenal glands, which are responsible for releasing stress hormones like cortisole. “When we over stimulate our adrenal glands they will eventually burn out! High sources of caffeine such as coffee, coke and energy drinks are extremely acid forming in the body. We want our bodies to be slightly alkaline at all times, to be in a state of optimal health.”

Because of its diuretic qualities, overdosing on caffeine can flush valuable vitamins out of the body. Paoli says losing B and Zinc will lead to low energy levels, and hydrating yourself with h2o will not be enough to replace that. “You will also experience headaches, due to the dehydration, and too much Arabica, high in acidity, will play havoc on your stomach.”

All reports have found caffeine does not cause significant loss of calcium in adults, but it’s an entirely different story for kids. Coffee has been said to ‘stump your growth’ but researchers say it does worse than that: it destroys! Caffeine actually dissolves the calcium in young bones.

The reason a double espresso can take you from dead tired to completely wired, is because it is an excellent impersonator of the compound adenosine. You might call adenosine nature’s ‘chill pill’. Right now, adenosine is coursing through your veins putting the brakes on your central nervous system.

When caffeine enters the system, it plugs into the adenosine receptors, causing your central nervous system to run at a faster rate. This explains what happens when we experience the ‘caffeine hit’ many people strive for, when filling their mug.

Lola Berry says the great thing about caffeine is that it stimulates you. “It gives you a quick pep-up, and most people find it helps stimulate your metabolism as well, making it a healthy addition to any weight loss routine.”

A study published in Current Sports Medicine Reports even finds that it improves performance and endurance during prolonged and intensive exercise. Tests show that ingesting 330mg (or 5mg per kilogram of body weight) up to an hour before workouts, boosts endurance, leads to better times, less exertion and faster recovery – up to 30 percent better in fact!

Of course, too much caffeine can send the body into overdrive and cause insomnia. You will experience highs of energy, but as the caffeine leaves the system the body’s energy levels can plummet, resulting in fatigue and lack of motivation.

what the researchers say

The studies continue and this time, the news is mostly good. In moderation, this lively substance have been given a clean bill of health, by, well… everyone: including scores of researchers, the US Food and Drug Administration and the American Medical Association.

Researchers in America and Scandinavia report that three cups of coffee can reduce the risk of type 2 diabetes. Chinese scientists claim it lowers the risk of Pakinson’s disease by 80 percent, while having four cups a day reduces the chances of getting colon cancer by 25 percent.

Tomas DePaulis, PhD, a research scientist at Vanderbilt University’s Institute for Coffee Studies, says overall, the research shows that coffee is far more healthful than it is harmful. “For most people, very little bad comes from drinking it, but a lot of good.”

“Coffee can even offset some of the damage caused by other vices. Some research indicates people who smoke and are heavy drinkers have less heart disease and liver damage, when they regularly consume large amounts of coffee, compared to those how don’t,” says DePaulis.

For decades people have known about the energizing effect of coffee, but today the habit of dealing with life’s dramas over a coffee even has scientific backing. Research has finally proved that a cup of coffee really is a good way to sooth away tension and boost your mood. But you knew that already, didn’t you?