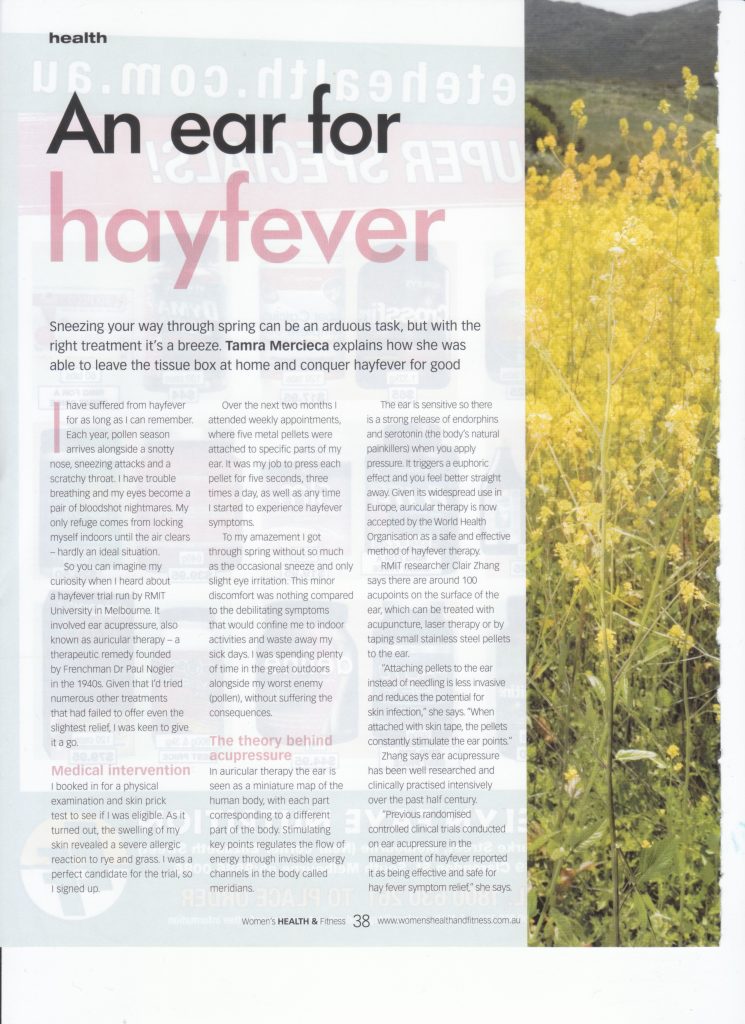 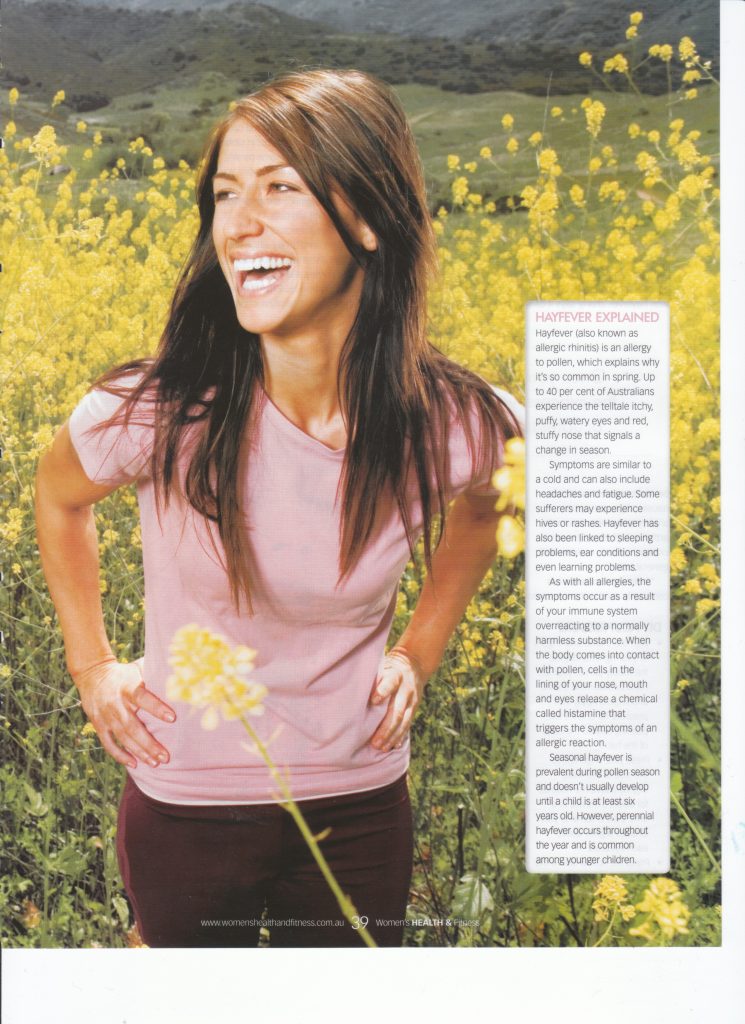 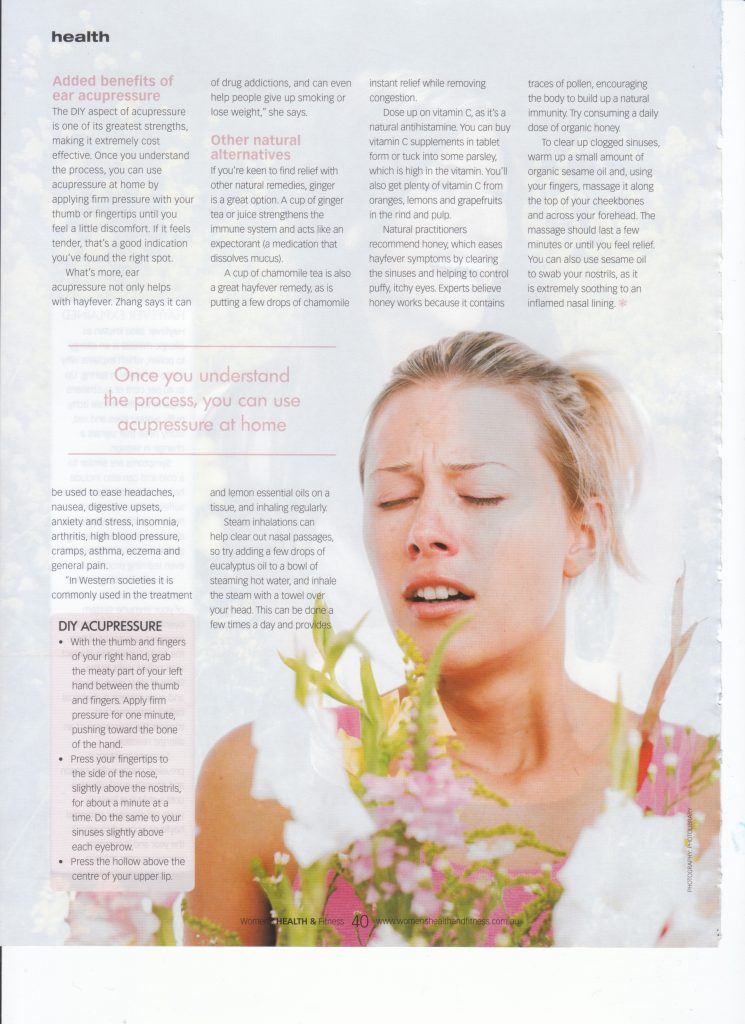 Could the answer to hayfever all be in the ear?

Sneezing your way through spring can be an arduous task, but with the right treatment it can be a breeze. Wellness coach Tamra Mercieca explains how she was able to leave the tissue box at home.

Hay fever has been a problem for me for as long as I can remember. Each year, pollen season would arrive alongside a snotty nose, sneezing attacks and a scratchy throat. I’d have trouble breathing and my eyes would become a pair of bloodshot nightmares. I’d be a mess. My only refuge came from locking myself indoors until the air cleared – hardly an ideal situation.

So you can imagine my curiosity when I heard about a hay fever trial being run by RMIT in Melbourne. It involved ear acupressure, also known as auricular therapy – a therapeutic therapy founded by Dr. Paul Nogier of France in the 1940s. Given that I’d tried numerous other treatments that had failed to offer me even the slightest relief, I was keen to give it a go.

I booked in for physical examination and skin prick test to see if I was eligible. As it turned out, the swelling of my skin revealed a severe allergic reaction to rye and the grass mix. I was a perfect candidate for the trial, so I signed up.

Over the next two months I attended weekly appointments, where five metal pellets were attached to specific parts on my ear. It was my job to press each pellet for five seconds, three times a day, as well as anytime I started to experience hay fever symptoms.

To my amazement I got through Spring without so much as the occasional sneeze and slight eye irritation. This minor discomfort was nothing compared to the debilitating symptoms that would confine me to indoor activities, and waste away my sick days. I was spending plenty of time in the great outdoors alongside my worst enemy (pollen), without suffering the consequences.

Hay fever (also known as allergic rhinitis) is an allergy to pollen, which explains why it’s so common around Springtime. Up to 40 percent of Australians experience the telltale itchy, puffy, watery eyes and red, stuffy nose that signals a change in season.

Symptoms are similar to a cold and can also include headaches and fatigue. Some sufferers may be unfortunate enough to experience hives or rashes. Hay fever has also been linked to sleeping problems, ear conditions and event learning problems.

As with all allergies, the symptoms happen as a result of your immune system overreacting to a normally harmless substance. When the body comes into contact with pollen, cells in the lining of your nose, mouth and eyes release a chemical called histamine that triggers the symptoms of an allergic reaction.

Seasonal hay fever is prevalent during pollen season and doesn’t usually develop until a child is at least six-years-old. Perennial hay fever however, occurs throughout the year and is common among younger children.

The theory behind acupressure

In auricular therapy the ear is seen as a miniature map of the human body, with each part corresponding to a different part of the body. Stimulating these key points regulates the flow of energy through invisible energy channels in the body called meridians.

The ear is sensitive so you get a strong release of endorphins and serotonin (the body’s own natural painkillers) when you apply pressure. People get a euphoric effect and feel better straight away. Given its widespread use in Europe, it is now accepted by the World Health Organisation as safe and effective.

RMIT researcher Clair Zhang says there are around one-hundred acupoints on the surface of the ear, which can be treated by using acupuncture, laser therapy, or by taping small stainless steel pellets on the point. “Attaching pellets to the ear instead of needling is less invasive and reduces the potential for skin infection. When attached with skin tape, those pellets constantly stimulate the ear points.”

Zhang says ear-acupressure has been well researched and clinically practised intensively over the past half century. “Previous randomized controlled clinical trials conducted on ear acupressure in the management of hay fever reported it as being effective and safe for hay fever symptom relief.”

The added benefits of ear-acupressure

The self-help aspect of acupressure is one of its greatest strengths, making it extremely cost-effective. Once shown how to do it, you can use acupressure yourself by applying firm pressure with your thumb or fingertips until you feel a little discomfort. If it feels tender, that’s a good indication that you’ve found the right spot.

Ear-acupressure not only helps with hay fever. Zhang says it can be used to ease headaches, nausea, digestive upsets, anxiety and stress, insomnia, arthritis, high blood pressure, cramps, asthma, eczema, as well as helping with pain relief. “In Western societies it is commonly used in the treatment of drug addictions, and can even help people give up smoking or lose weight.”

If you’re keen to find relief in other natural remedies, ginger could be the answer you’re looking for. A cup of ginger tea or ginger juice strengthens the immune system and acts like an expectorant. A cup of chamomile tea is also a great hay fever remedy, as is putting a few drops of chamomile and lemon essential oils on a tissue, and inhaling regularly.

Steam inhalations can be really effective in clearly out nasal passages, so try adding a few drops of eucalyptus oil to a bowl of steaming hot water, and inhale the steam with a towel over your head. This can be done a few times a day and provides instant relief while removing congestion.

Dose up on Vitamin C, as it’s a natural antihistamine. You can buy Vitamin C supplements in tablet form or tuck into some parsley, which is really high in Vitamin C. You’ll also get plenty of Vitamin C from oranges, lemons and grapefruits in both the rind and the pulp.

To clear up clogged sinuses, warm up a small amount of organic sesame oil, and using your fingers, massage along the top of cheekbones and across your forehead. The massage should last a few minutes or until you feel relief. Use long stroke from your temporal mandibular (located just in front of your ear) on down your neck. You can also use sesame oil to swab your nostrils, as it is extremely soothing to inflamed nasal lining.

Do it yourself acupressure treatment

With your thumb and fingers of your right hand, grab the meaty part of your left hand, between the thumb and fingers. Apply firm pressure for one minute, pushing toward the bone of the hand.

Press finger tips to the side of the nose, slightly above the nostrils for about a minute at a time. Do the same to your sinuses slightly above each eyebrow.

Press the hollow above the centre upper lip as needed.