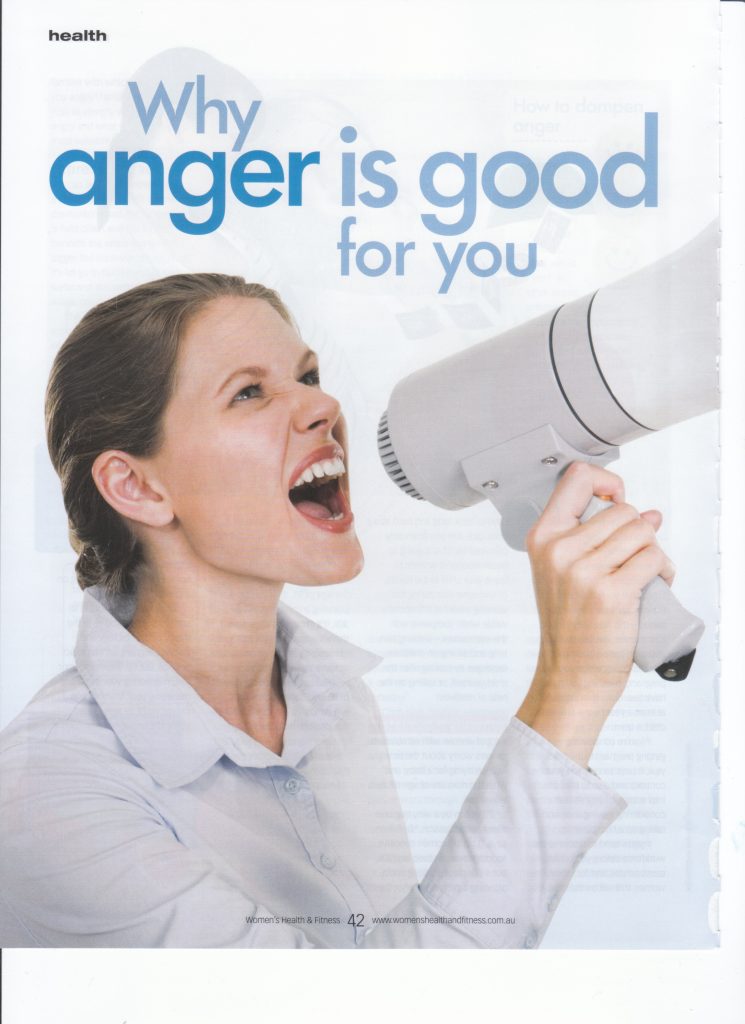 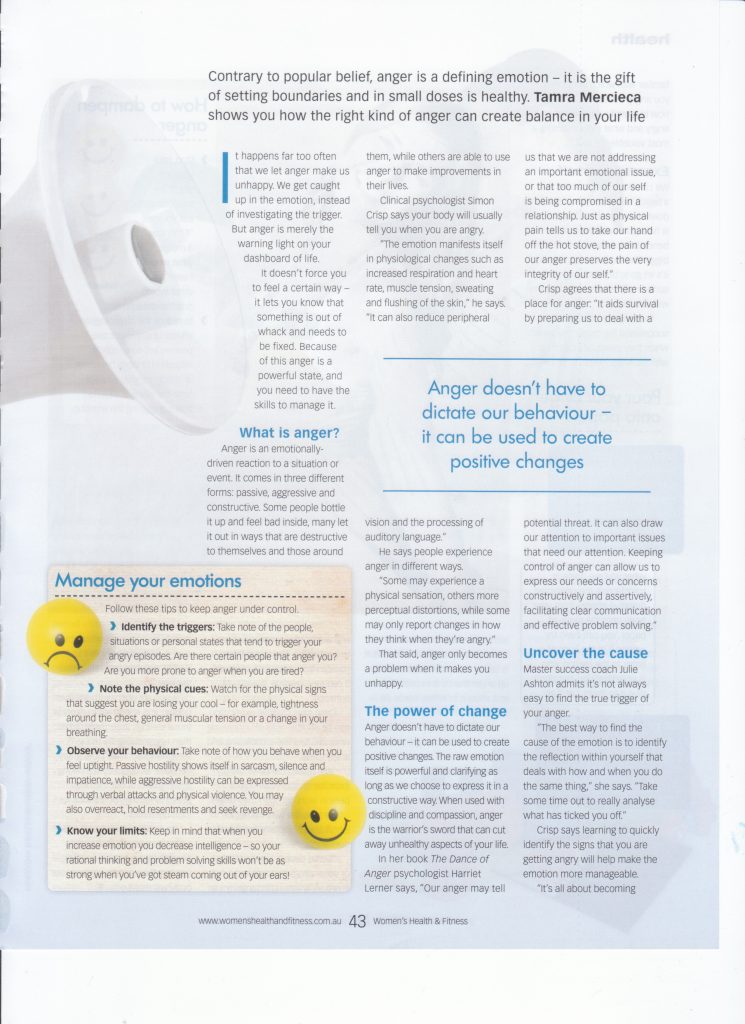 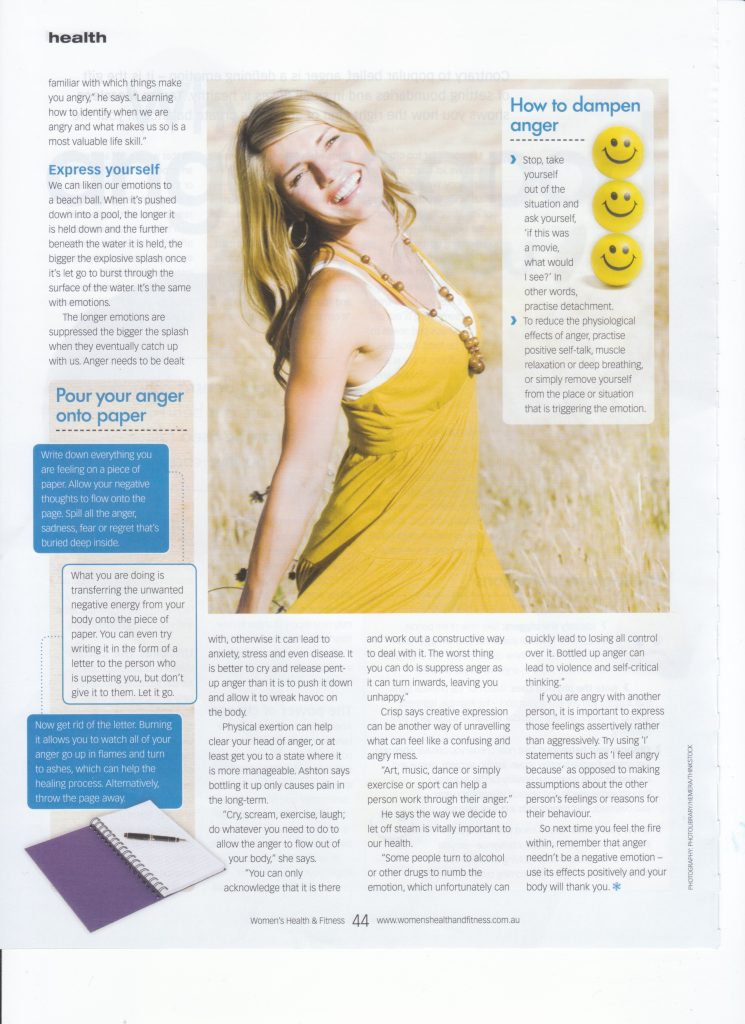 Contrary to its bad press, anger is a defining emotion. It is the gift of setting boundaries. As Performance Coach Tamra Mercieca explains, anger can act as a barometer for what has gone wrong, where people have overstepped a person’s limits, or where injustice is occurring.

It happens far too often, we let our anger make us unhappy. We get caught up in the emotion, instead of investigating the trigger. But anger is merely the warning light on your dashboard of life. It doesn’t force you to feel a certain way, it lets you know that something is out of whack and needs to be fixed. Because of this, anger is actually a powerful state to be in, as long as you have the skills to manage it.

So what is anger? It is an emotionally triggered reaction to a situation or event and comes in three different forms: passive, aggressive and constructive. Some people bottle it up and feel bad inside, many let it out in ways that are destructive to themselves and those around them, while others are able to use the anger to make improvements in their life.

Clinical Psychologist Simon Crisp says your body will usually tell you when you are angry. “The emotion manifests itself in physiological changes such as increased respiration and heart rate, muscle tension, sweating and flushing of the skin. It can also reduce peripheral vision, and the processing of auditory language.”

He says people experience anger in different ways. “Some may experience a physical sensation, others more perceptual distortions, while some may only report changes in how they think when they’re angry.” That said, anger only becomes a problem when it is making you unhappy.

a place for emotions

Anger doesn’t have to dictate our behaviour, it can be used to create positive changes. The raw emotion itself is powerful and clarifying as long as we choose to express it in a constructive way. When used with discipline and compassion, anger is the warrior’s sword that can cut away that which is putrid and unhealthy.

In her book The Dance of Anger, Psychologist Harriet G. Lerner, says “Our anger may tell us that we are not addressing an important emotional issue, or that too much of our self is being compromised in a relationship. Just as physical pain tells us to take our hand off the hot stove, the pain of our anger preserves the very integrity of our self.”

Crisp agrees that there is a place for anger. “It aids survival by preparing us to deal with a potential threat. It can also draw our attention to important issues that need our attention. Keeping control of anger can allow us to express our needs or concerns constructively and assertively, facilitating clear communication, and effective problem-solving.”

Master Success Coach Julie Ashton admits it’s not always easy to find the true trigger of someone’s anger. “The best way to find the cause of the emotion, is to identify the reflection within yourself that deals with how and when you do the same thing. Take some time out to really analyse what has ticked you off. ”

Crisp says learning to quickly identify the signs that you are getting angry will help make the emotion more manageable. “It’s all about becoming familiar with what things make you angry. Learning how to identify when we are angry and what makes us so, is a most valuable life skill.”

Identify the triggers:  Take note of the people, situations or personal states that tend to trigger your angry episodes. Are there certain people that anger you? Are you more prone to anger when you are tired?

Note the physical cues: Watch for the physical signs that suggest you are losing your cool, eg. Tightness around the chest, general muscular tension, a change in your breathing, shaking, etc.

Observe your behaviour:  Take note of how you behave when you are getting uptight. Passive hostility shows itself in sarcasm, being silent, impatience, while aggressive  hostility can be expressed through verbal attacks and physical violence. You may also overreact, hold resentments and seek revenge.

Just keep in mind that when you increase emotion you decrease intelligence – so your rational thinking and problem solving skills won’t be as strong.

We can liken our emotions to a beach ball. When it’s pushed down into a pool, the longer it is held down, and further beneath the water it is being held, the bigger the explosive splash once it’s let go and bursts through the surface of the water. It’s the same with emotions.

The longer they are suppressed the bigger the splash when they eventually catch up with us. Anger needs to be dealt with otherwise it lead to nervous breakdowns and disease. It is better to cry and release pent up anger, than it is to push it down, and allow it to wreak havoc on the body.

Physical exertion can help clear your head of anger, or at least get you to a state where it is more manageable. Ashton says bottling it up only causes pain in the long-term. “Cry, scream, exercise, laugh; do whatever you need to do to allow the anger to flow out of your body.”

She says there is no point in trying to control anger. “You can only acknowledge that it is there and work out a constructive way to deal with it. The worst thing you can do is suppress anger as it can turn inwards leaving you unhappy.”

Crisp says creative expression can be another way of unravelling what can feel like a confusing angry mess. “Art, music, dance or simply plain exercise or sport can help a person work through their anger.”

Crisp says the way we decide to let off steam is vitally important to our health. “Some people turn to alcohol or other drug use to numb the emotion, which unfortunately can quickly lead to losing all control over it. Bottled up anger leads to violence or other destructive behaviour or self-critical thinking.”

If you are angry at another person, it is important to express those feelings assertively and not aggressively. Try using ‘I statements’ such as: ‘I feel angry because …..’ If you get angry at a situation such as your computer shutting down, it’s okay to yell at the machine. It won’t hurt anyone’s feelings, but destroying the keyboard will (maybe not its feelings, but certainly its functioning).

Pour your anger onto paper

Write down everything you are feeling on a piece of paper. Allow your negative thoughts to flow onto the page. Spill all the anger, sadness, fear or regret that’s buried deep inside.

What you are doing is transferring the unwanted negative energy from your body onto the piece of paper. You can even try writing it in the form of a letter to the person who is upsetting you, but don’t give it to them. Let it go.

Now get rid of the letter. Burning it allows you to watch all of your anger go up in flames and turn to ashes, which can help in the healing process. Or you could just throw the page away – whatever works for you.

You may also enjoy reading my other blogs:

Do you lose your sh*t and does it shock you?

How to know the difference between feelings and emotions.

Is your ego controlling your life?