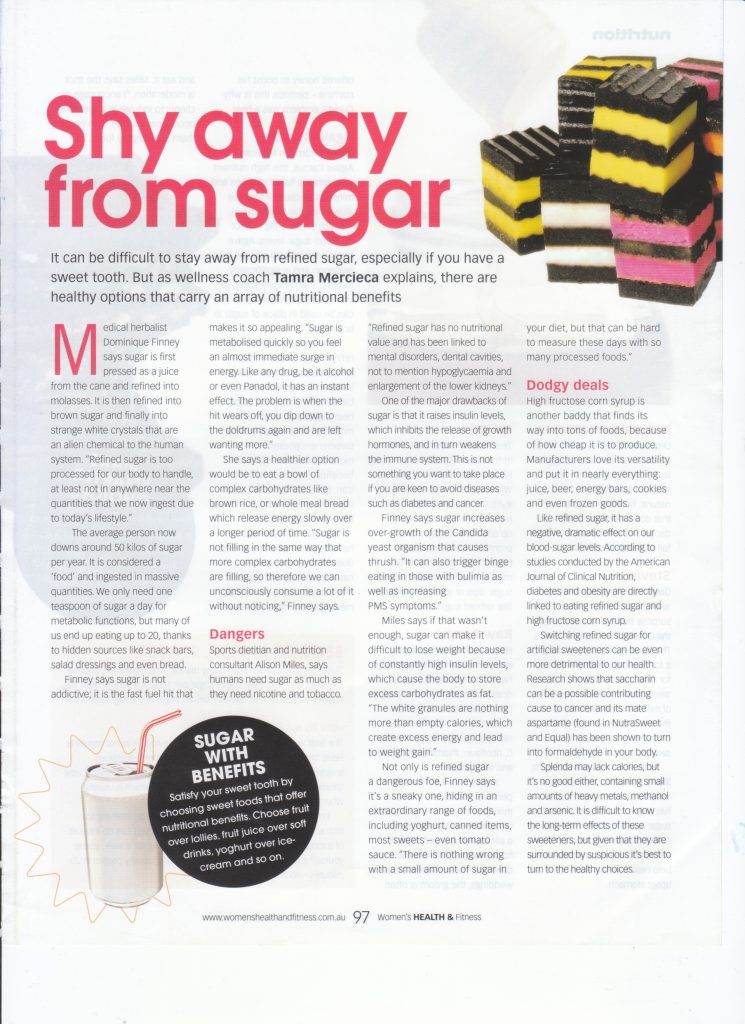 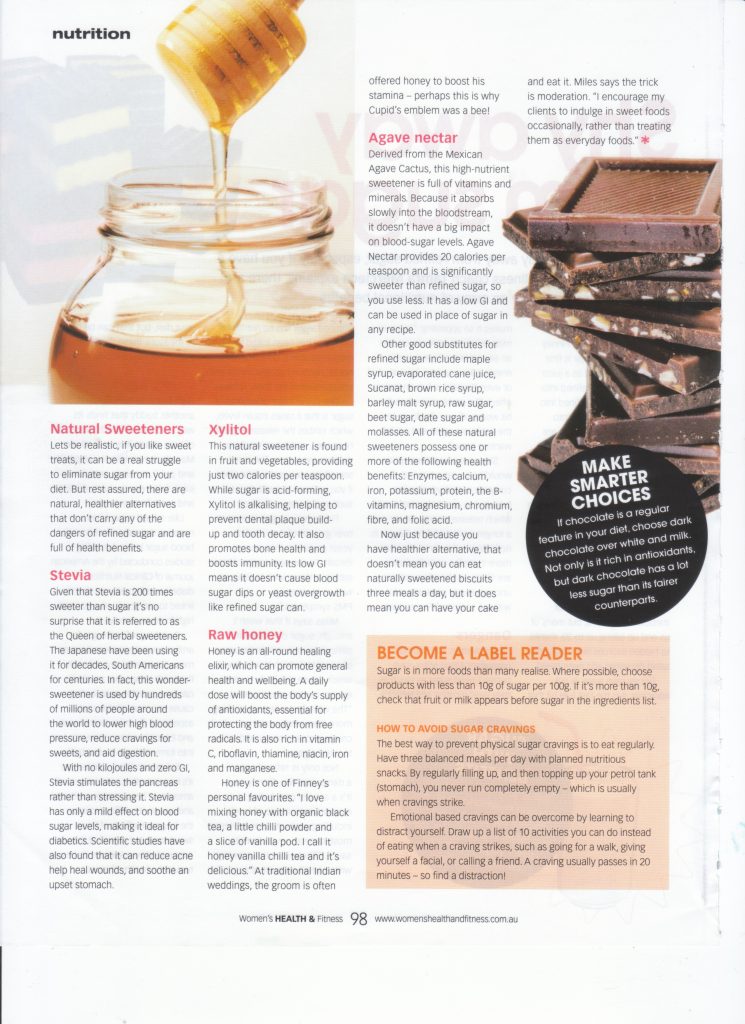 Shy Away From Sugar

It can be difficult to stay away from refined sugar, especially if you have a sweet tooth. But as Wellness coach Tamra Mercieca explains, there are healthy options that carry an array of nutritional benefits.

What is this evil entity? In its simplest form, it is the juice from a sugar cane plant. Ingested in its raw simplest form it’s not that bad, in moderation. The problem is the refining process strips away all the enzymes, fibre, vitamins, and minerals.

Medical herbalist Dominique Finney says sugar is first pressed as a juice from the cane and refined into molasses, it is then refined into brown sugar and finally into strange white crystals that are an alien chemical to the human system. “Refined sugar is too processed for our body to handle, at least not in anywhere near the quantities that we now ingest due to today’s lifestyle.”

The average person now downs around 50 kilos of the stuff per year. It is considered a ‘food’ and ingested in massive quantities. We only need one teaspoon a day for metabolic functions, but many of us end up eating up to 20, thanks to hidden sources like snack bars, salad dressings and even bread.

Finney says sugar is not addictive; it is the fast fuel hit that makes it so appealing. “Sugar is metabolised quickly so you feel an almost immediate surge in energy. Like any drug, be it alcohol or even Panadol, it has an instant effect. The problem is when the hit wears off, you dip down to the doldrums again and are left wanting more.”

She says a healthier option would be to eat a bowl of complex carbohydrates like brown rice, or whole meal bread which release energy slowly over a longer period of time. “Sugar is not filling in the same way that more complex carbohydrates are filling, so therefore we can unconsciously consume a lot of it without noticing,” Finney says.

Sports Dietitian and Nutrition Consultant Alison Miles, says humans need sugar as much as they need nicotine and tobacco. “It has no nutritional value and has been linked to mental disorders, dental cavities, not to mention hypoglycaemia and enlargement of the lower kidneys.”

One of the major drawbacks of sugar is that it raises insulin levels, which inhibits the release of growth hormones, and in turn weakens the immune system. This is not something you want to take place if you are keen to avoid diseases such as diabetes and cancer.

Finney says sugar increases over-growth of the Candida yeast organism which causes thrush. “It can also trigger binge eating in those with bulimia as well as increasing PMS symptoms.”

Miles says if that wasn’t enough, the white stuff can make it difficult to lose weight because of constantly high insulin levels, which cause the body to store excess carbohydrates as fat. “The white granules are nothing more than empty calories, which create excess energy and lead to weight gain.”

Not only is refined sugar a dangerous foe, Finney says it’s a sneaky one, hiding in an extraordinary range of foods, including yoghurt, canned items, most sweets – even tomato sauce. “There is nothing wrong with a small amount of sugar in your diet, but that can be hard to measure these days with so many processed foods.”

High fructose corn syrup is another baddy that finds its way into tons of foods, because of how cheap it is to produce. Manufacturers love its versatility and put it in nearly everything: juice, beer, energy bars, cookies and even frozen goods.

Like refined sugar, it has a negative, dramatic effect on our blood-sugar levels. According to studies conducted by the American Journal of Clinical Nutrition, diabetes and obesity are directly linked to eating refined sugar and high fructose corn syrup.

Switching refined sugar for artificial sweeteners can be even more detrimental to our health. Research shows that saccharin can be a possible contributing cause to cancer and its mate aspartame (found in NutraSweet and Equal) has been shown to turn into formaldehyde in your body.

Splenda may lack calories, but it’s no good either, containing small amounts of heavy metals, methanol and arsenic. It is difficult to know the long-term effects of these sweeteners, but given that they are surrounded by suspicious it’s best to turn to the healthy choices.

Lets be realistic, if you like sweet treats, it can be a real struggle to eliminate the white stuff from your diet. But rest assured, there are natural, healthier alternatives that don’t carry any of the dangers of refined sugar and are full of health benefits.

STEVIA: Given that Stevia is 200 times sweeter than sugar it’s no surprise that it is referred to as the Queen of herbal sweeteners. The Japanese have been using it for decades, South Americans for centuries. In fact, this wonder-sweetener is used by hundreds of millions of people around the world to lower high blood pressure, reduce cravings for sweets, and aid digestion.

With no kilojoules and zero GI, Stevia stimulates the pancreas rather than stressing it. Stevia has only a mild effect on blood sugar levels, making it ideal for diabetics. Scientific studies have also found that it can reduce acne, help heal wounds, and sooth an upset stomach.

RAW HONEY: Honey is an all-round healing elixir, which can promote general health and wellbeing. A daily dose will boost the body’s supply of antioxidants, essential for protecting the body from free radicals. It is also rich in vitamin C, riboflavin, thiamine, niacin, iron and manganese.

Honey is one of Finney’s personal favourites. “I love mixing honey with organic black tea, a little chilli powder and a slice of vanilla pod. I call it honey vanilla chilli tea and its delicious.” At traditional Indian weddings, the bridegroom is often offered honey to boost his stamina – perhaps this is why Cupid’s emblem was a bee!

AGAVE NECTAR:  Derived from the Mexican Agave Cactus, this high-nutrient sweetener is full of vitamins and minerals. Because it absorbs slowly into the bloodstream, it doesn’t have a big impact on blood-sugar levels. Agave Nectar provides 20 calories per teaspoon and is significantly sweeter than refined sugar, so you use less. It has a low GI and can be used in place of sugar in any recipe.

Now just because you have healthier alternative, that doesn’t mean you can eat naturally sweetened biscuits three meals a day, but it does mean you can have your cake and eat it. Miles says the trick is moderation. “I encourage my clients to indulge in sweet foods occasionally, rather than treating them as everyday foods.”

Sugar is in more foods than many realise. Where possible, choose products with less than 10g of sugar per 100g. If it’s more than 10g, check that fruit or milk appears before sugar in the ingredients list.

How to avoid CRAVINGS

The best way to prevent physical sweet cravings is to eat regularly. Have three balanced meals per day with planned nutritious snacks. By regularly filling up, and then topping up your petrol tank (stomach), you never run completely empty – which is usually when cravings strike.

Emotional based cravings can be overcome by learning to distract yourself. Draw up a list of 10 activities you can do instead of eating when a craving strikes, such as going for a walk, giving yourself a facial, or calling a friend. A craving usually passes in 20 min – so find a distraction!